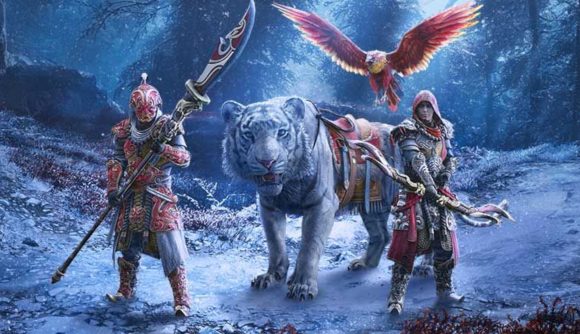 Assassin’s Creed Valhalla‘s next title update has been revealed, and it pretty much just contains a single bug fix. Despite the gigabytes you’ll have to download, Ubisoft says there are “no major player facing changes” in this one. Instead, it mostly seems to be setting the stage for a bunch of new items in the real money store.

Title update 1.4.2 for Assassin’s Creed Valhalla is due to launch on February 1 at 4am PST / 7am EST / 12pm GMT. PC players can expect an 11GB download. On Xbox consoles, it’ll be between 5GB and 6GB. On PlayStation machines, the download is in a svelte 2.5GB to 3GB range.

This update will address “an issue that caused some HD textures to be missing”, as the patch notes explain. And… that’s basically it. Ubisoft has provided some preview images of the next few items coming to the real money store over the next couple of months, but whatever other changes are coming are all behind the scenes.

The next major release for Assassin’s Creed Valhalla is Dawn of Ragnarok, a major expansion set to launch in March.