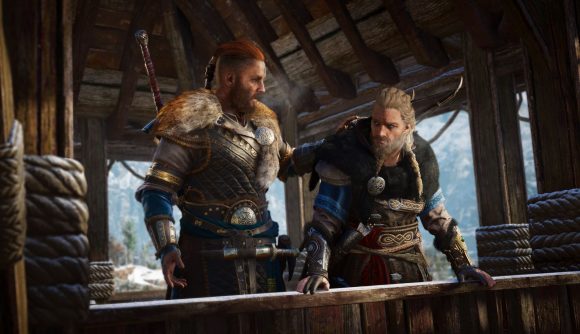 Assassin’s Creed Valhalla is out now, and the response has largely been a positive one, though it’s not been perfect. One of those issues is a bit of ableist language in one enemy description, and after an accessibility advocate brought the issue to light on social media, Ubisoft says it plans to make an adjustment in a future update.

As in other Assassin’s Creed titles, there’s a big menu full of enemy targets to take down, with little bits of background story to give them more personality. One of them is Eorforwine, who is described like this: “Horribly burned in a childhood accident, Eorforwine is terrified someone will see her disfigured face. She relieves her fury with bursts of violence.”

The issue isn’t the presence of a character with facial scars, but rather implying that those scars are necessarily a source of shame. Courtney Craven, editor-in-chief of accessibility-focused review site, Can I Play That?, described the blurb as “unacceptable”, and it seems Ubisoft agrees.

“Thank you so much for pointing this out – we apologize for unintentionally reinforcing ableism through this language”, Ubisoft says in a response on Twitter. “We will remove this language in an upcoming update.”

Thank you so much for pointing this out – we apologize for unintentionally reinforcing ableism through this language. We will remove this language in an upcoming update.

This isn’t the first time Ubisoft has elected to alter Assassin’s Creed content post-launch in response to sensitivity concerns. A piece of Assassin’s Creed Odyssey DLC required players to enter a heterosexual romance with another character, after all other romantic encounters in the game had been optional, and this storyline awarded an achievement called ‘Growing Up’. An update adjusted dialogue in that DLC to “better reflect the nature of the relationship for players selecting a non-romantic storyline”.