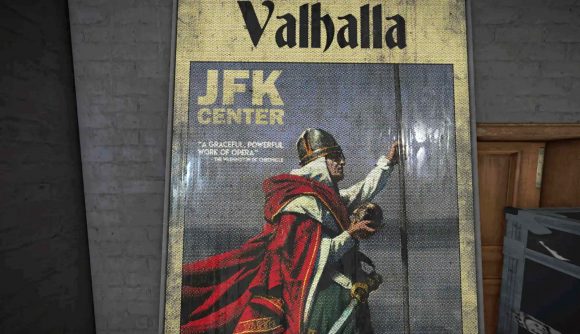 Assassin’s Creed Valhalla was officially revealed this week, but it was unofficially revealed over a year ago with an easter egg in The Division 2. A poster in the game featured some Assassin’s Creed iconography in a Nordic setting with ‘Valhalla’ written out on top – and now Ubisoft says that this oddly specific teaser was a “complete coincidence”.

McDevitt says “I don’t even think this game had a name at the time”, and the studio was working under a codename at the time of The Division 2’s release. “Once you play Valhalla, our game,” McDevitt adds, “you’ll see that there’s nothing to do with the poster that was in The Division 2.”

The strange thing about The Division 2 poster is that the figure in it appears to be holding an Apple of Eden – one of the central MacGuffins of the whole Assassin’s Creed series. The discovery of this poster prompted industry insider Jason Schreier of Kotaku to spill the beans on the upcoming Viking setting for what was then codenamed Kingdom.

It’s an utterly bizarre coincidence, especially now that we know what we do heading toward the Assassin’s Creed Valhalla release date. My only question is this: what was the guy in that poster supposed to be holding, anyway?