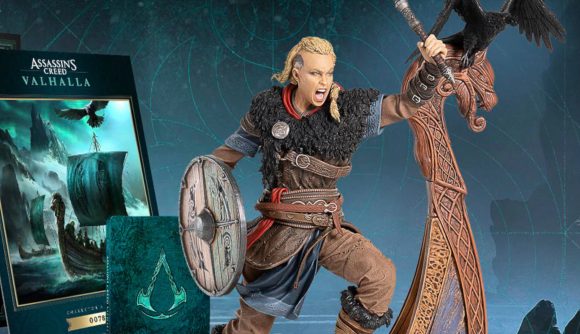 Assassin’s Creed Valhalla has finally been properly announced, and while the initial reveal materials showcase our protagonist, Eivor, as a (healthily-bearded) man, the new game will let you choose the hero’s gender, so you can play as a Viking warrior woman, too. But is that historically accurate? Ubisoft has already put up an early answer to the most tiring question the internet has ever asked.

“The archaeological sources are highly debated on that specific issue,” historian and AC Valhalla advisor Thierry Noel says in an official FAQ. “But the fact is, and I think what’s really important, is that it was part of their conception of the world. Sagas and myths from Norse society are full of tough female characters and warriors. It was part of their idea of the world, that women and men are equally formidable in battle, and that’s something that Assassin’s Creed Valhalla will reflect.”

Our first look at Eivor as a woman comes courtesy of a statue packed in with the collector’s edition of the game. Ubisoft tells Eurogamer that marketing for Valhalla will “showcase both at different points”, and it looks like we’ll be waiting a bit longer to see what female Eivor looks like in-game.

Your character will be customisable with different types of tattoos, war paint, and beards, though I have to imagine male Eivor is going to get the better selection of options in that third category.

We will be happy to reveal our first Assassin’s Creed Valhalla gameplay trailer during the First Look Xbox Series X Gameplay on Inside Xbox. Stay tuned! https://t.co/1KjtTI1FdF