I recently got the opportunity to sit down and play Assassin’s Creed Valhalla for an entire day. Great times to be had maiming, stealing, singing, drinking, and shagging my way through the strange and exotic landscape of the East Midlands, like a relatively well-behaved rugby tour. However, it turns out that strutting around with Viking legends like Ivar the Boneless and Ubba Ragnarsson is pretty serious business, and so it was nice to chill out with a few games of Orlog between raiding villages and installing puppet kings.

First off, what is Orlog? The Anglo-Norse word loosely translates to ‘fate’, but it should probably be translated to fun, because fun is what you’ll be having when you play Orlog.

Orlog is a dice-based minigame in Assassin’s Creed Valhalla that a number of NPCs will challenge you to play in settlements across Dark Ages England. The concept is simple: two players duel using a set of six-sided dice. They roll their set of dice three times to get the best possible outcome before the action phase, and can confirm as many or as few dice after each roll. The actions represented on the dice are: block, armour, melee attack, ranged attack, and steal – with the ‘block’ and ‘armour’ actions countering melee and ranged attacks respectively. The ‘steal’ action will lift a God Favour token from your opponent’s pile and place it in yours, but you can also accrue such tokens by rolling actions with a gold trim around them. When you have enough tokens you can play a God Favour, and depending on which god you call on, you can damage your opponent, heal yourself, or double the coverage of your blocking actions.

As you can see your opponent’s hand at all times, Orlog has you constantly debating whether to counter their hand with blocks, unleash your own barrage of attacks, or continue to hoard favour tokens and hope to deal a massive amount of damage later on.

Orlog is the only way to unite the Anglo-Saxon people

A single game of Orlog can be over within ten minutes, but there’s a meaningful decision to be made with practically every roll of the dice, which promises to keep you duelling until you emerge victorious. Orlog is also refreshingly simple and intuitive. As much as Gwent’s depth and complexity have helped make it a standalone success, bothering to properly learn its rules in the middle of a 100-hour RPG campaign is something that never occurred to me when playing The Witcher 3. 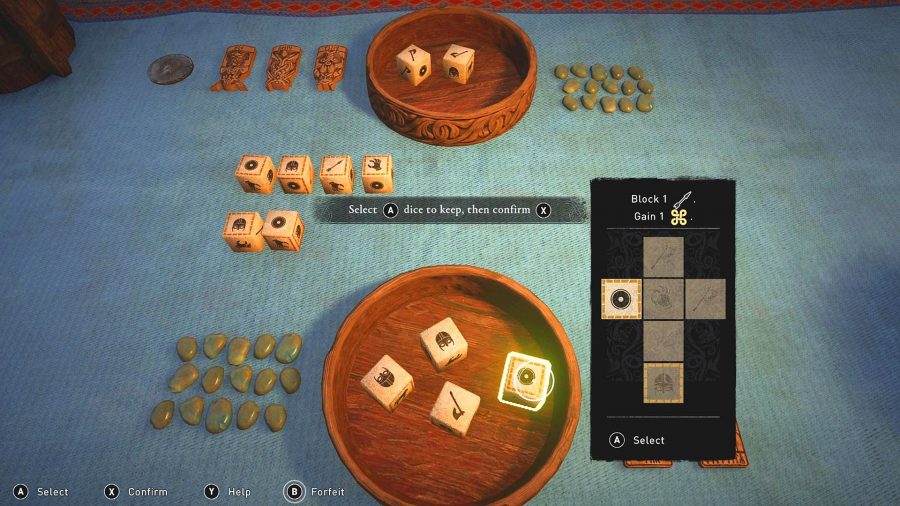 Conversely, Orlog is the kind of game you can play on a whim, pausing mid-mission with the sincere intention of having a quick throw to earn some silver, only to find you’ve spent half a day bothering strangers for games and ignoring the PR’s pleas to get you back to stabilising Mercia.

The PR doesn’t understand Orlog like you do. Orlog is the only hope the Danes have of bringing the Anglo-Saxon people onside:

“ORLOG!” screams Eivor, throwing a Mercian farmer off a bench and forcing some dice into his friend’s hands.

“I beg your mercy Dane, I’ve nev… ” the peasant quivers.

Eivor leans in and slowly wraps her giant Norwegian hands over those of the peasant, squeezing tighter and tighter.

The whole village is now gathered around, waiting for Orlog. Finally, the peasant nods and Eivor releases his mangled hands. Cradling the dice as best he can, the peasant manages to roll them. Eivor flashes an approving smile.

“ORLOG!” roar the villagers in unison.

So, anyway, I know that getting everything ready for the Valhalla release date is probably the top priority for Ubisoft Montreal and everything. However, I would very much like a standalone version of Orlog with more actions, bigger dice, and meta God Favours I can use to wreck English peasants wherever I roam.