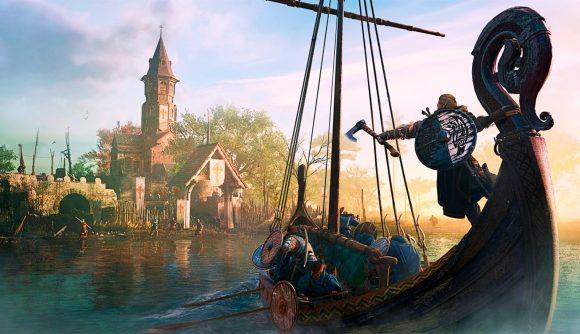 We don’t have many more details than that right now, unfortunately, though trophies for the DLC recently popped up in the PSN back-end, giving us a glimpse of what to expect from the broader structure of the campaign. One of the unlockables tasks you with completing “all territories of Francia”, so it looks like the expansion could be territory-based. Most importantly of all, though, there’s a trophy called “Pat the Cats”, which asks you to, well, pet those good kitties of Evreux.

You’ve got plenty of content to keep you busy until you give those chonky Norman cats a scratch behind the ears. The Sigrblot Festival runs from July 29 to August 19 and features new festivities and quests you can do to get exclusive rewards, including a one-handed sword. However, keep in mind that you have to reach England and complete one of the first two narrative arcs and be at least Settlement Level 2 to take part in the fun.

Ubisoft is adding other handy tweaks and features in an update tomorrow, too. You’re getting a new menu option to adjust NPCs’ difficulty levels to your liking. Bosses have their own intended difficulty levels, though, so they won’t be affected. Ubisoft is also tossing some new Raven, Bear, and Wolf skills into the mix to freshen things up.

If you’d like to see the blog post in full, you can find it above. If you’re looking for more of the best open-world games on PC to keep you busy before the Assassin’s Creed Valhalla Siege of Paris release date, you can follow that link.