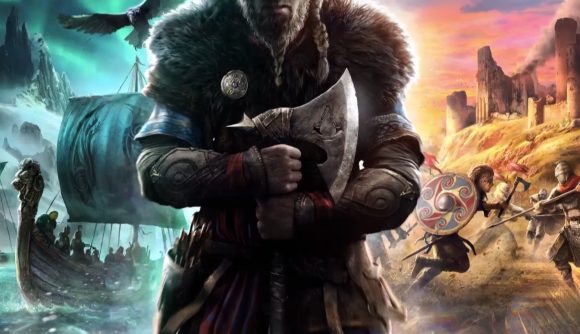 Well, it’s official – Assassin’s Creed Valhalla will be the next game in the major action-adventure games series. It was announced yesterday in an eight-hour teaser stream, with its Viking setting unveiled piece-by-piece by the artist Kode ‘BossLogic’ Abdo. Now, developer Ubisoft Montréal has revealed the full might of development behind the game – there are 15 studios bringing it to life.

That’s according to a tweet posted by the dev, in which it references 14 other collaborating studios. “Exciting!” the post says, “An immense congratulations to our studio warriors for all the good work and passion building to that reveal. We’d also like to thank the 14 co-dev studios all around the world. You know who you are, and we’re thankful for your dedication!”, signing off with “Skàl!”, which means “Cheers!” in Icelandic.

It’s not clear from the tweet which the other collaborating studios are, but one thing’s for sure – that’s an enormous number. For context, the previous title in the series, Assassin’s Creed Odyssey, was brought to life by seven studios, less than half of the figure working away on Valhalla.

Exciting! An immense congratulations to our studio warriors for all the good work and passion building to that reveal. We’d also like to thank the 14 co-dev studios all around the world. You know who you are, and we’re thankful for your dedication! Skàl! pic.twitter.com/hBPpFZKkrP

There’s no sign of an Assassin’s Creed Valhalla release date to scribble down on our calendars just yet, but hopefully we’ll have some idea of when and what to expect when the world premiere drops later today.

In the meantime, go get a read of our lists of the best adventure games, open-world games, RPG games, and of course best Viking games already ready to play on PC if you’re keen to dive into something while you wait.