The line between sim racing and motorsport is blurring. And it isn’t just that the physics underpinning the likes of Assetto Corsa, Project CARS 2 and iRacing are getting closer to the behaviour of the fuel-gargling track thoroughbreds they simulate. Sim racing is now a legitimate entry point for budding race drivers, and a legitimate training tool for those already racing on the physical track.

So when a new sim comes out, the conversation surrounding it isn’t just about how the cars feel, or how nice their flaked paint jobs look under the midday sun at Curva Parabolica at Monza. It’s about this game’s capacity to take would-be racing drivers to the big time. No pressure, Assetto Corsa Competizione.

Fortunately for Kunos Simulazioni, the 1.01 release of this officially licensed Blancpain endurance racing series game isn’t a stab in the dark. It entered Steam Early Access in the back half of 2018 and had a ready-made community waiting for it who’d previously assembled around 2014’s Assetto Corsa. A substantial amount of polish – and content – has been added since the first Early Access build, meaning Assetto Corsa Competizione feels more complete at release than its predecessor ever did. But ultimately it’s that predecessor that ensures this game’s success. In the olden days, the developers would have crossed their fingers and hoped that the officially licensed cars were enough to find an audience. In 2019 the Assetto Corsa name is enough for that audience to actively seek out the game.

And that’s just as well, because the Blancpain GT Series Endurance Cup isn’t ideally suited to videogames. Three-hour races, the odd 24-hour event, five baffling categories derived from the already obscure GT3, GT4 and Supersport classifications in GT racing, very little TV visibility, and no household names to speak of. It’s a series with the kind of wilful commercial unwieldiness that of course magnetises motorsport diehards, who find it all very romantic. 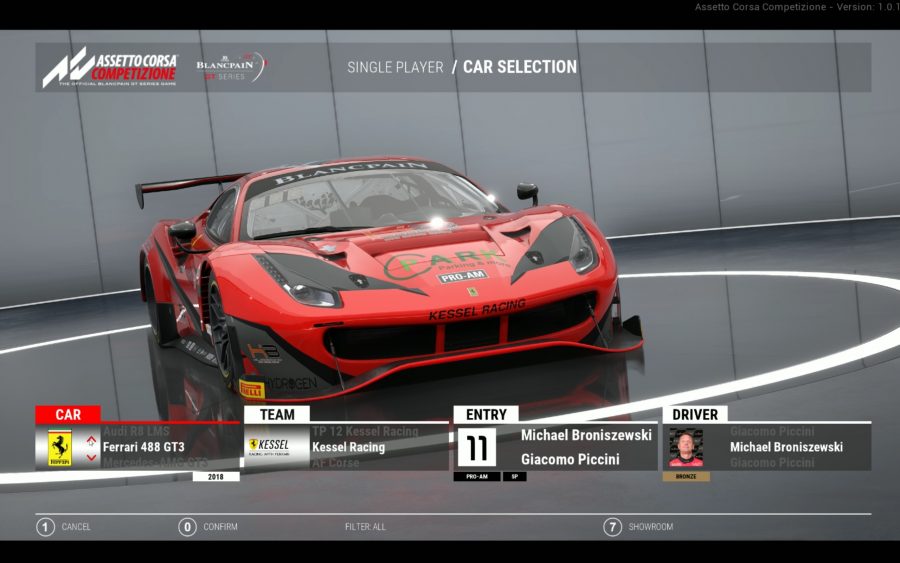 Although it might not pull in the crowds like an F1 or WRC licence, the Blancpain branding is nonetheless a valuable addition to this game. The biggest problem with Assetto Corsa, as you’ll remember, was that it lacked the kind of long-form career mode you could really sink your teeth into. There was a token offering that started you out racing Fiat 500 Abarths around traffic cones and graduated you through more powerful categories, but it didn’t feel particularly meaningful to beat 19 no-name drivers in identical cars to yours race in, race out. Multiplayer was the only convincing reason to stick around in Kunos’ last game.

Here, though, the Blancpain Series offers that much-needed single-player structure. Assetto Corsa Competizione really leans into it too, beginning its career mode with glossy video introductions from 2017 Blancpain champion Mirko Bortolotti and a well-judged driving school component. It’s similar in spirit to the Young Driver Programmes that Codemasters’ F1 series used to begin their career modes with, your performance in a series of short tests having a bearing on the number of drives available to you in your first season of racing.

I wish racing sims had been so approachable when I first plugged a force feedback wheel into my PC in the late nineties – the philosophy back then was ‘practice until you can stay on the track for a whole lap, then we’ll talk.’ Here, the introduction to career mode is part narrative journey, part tutorial, all polished to a level of sheen that’s frankly surprising. A good thing. 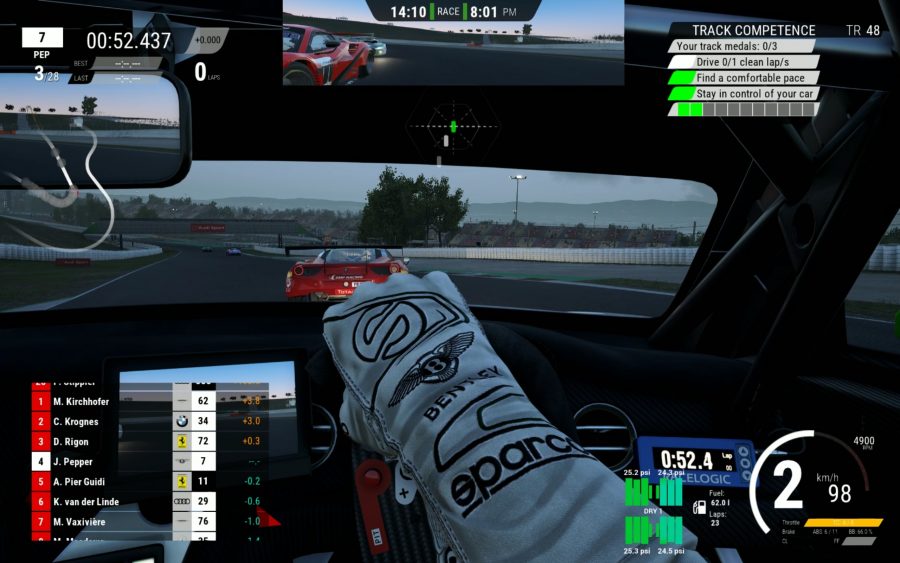 The racing, then. Blancpain cars – track-spec Mercedes, Audis, Ferraris, Lambos, Bentleys and Jags – are wide, twitchy things that clutter up the width of a track and make overtaking singularly difficult. Which of course is excellent. There’s a real sense of having got one over on the AI when you do find enough space to muscle through, and the physics behaviour is unforgiving enough that running off-track or making significant contact with another car will more or less ruin your race. The stakes always feel high.

For its part, the AI offers a stiff challenge for outright pace but doesn’t do much to sell the idea that it’s human, fallible, and making reactive decisions. To my mind, Codemasters are still out on their own echelon in this regard. The errors and opportune lunges in their F1 series give each race its own narrative, and it’s a shame that other racing sims don’t feature similarly believable AI opponents. 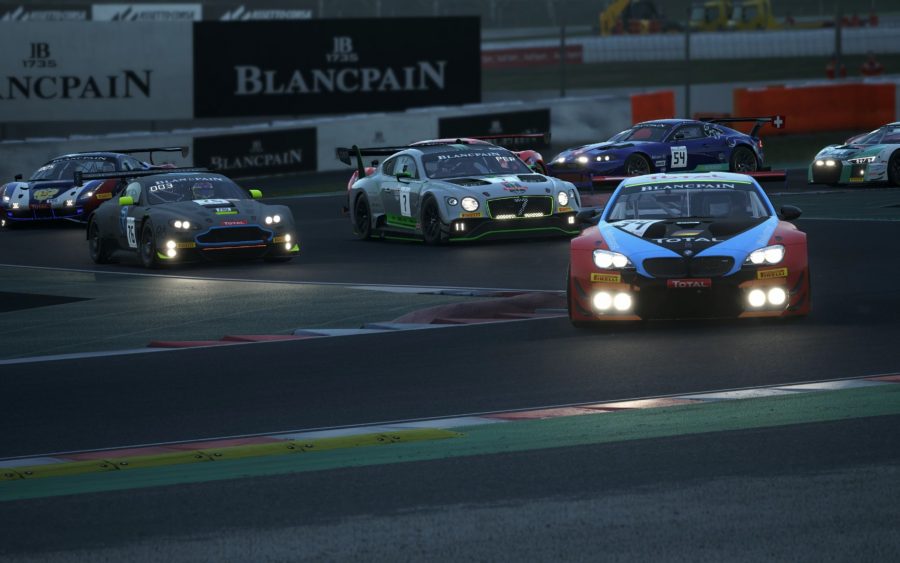 This being endurance racing, the results aren’t usually decided in the opening lap by sending it up the inside of an opponent in the braking zone. Instead, success is stubbornly forged on the lap timings sheet, battering opponents with sheer consistency over hours, rather than seconds. Day turns to night with impressive subtlety and gradation, opponents pit in and reappear, and all the while the battle is being fought against your own concentration levels. And those soft muscles between your thumb and forefinger. They take a hammering after three hours at Spa, let me tell you. Even if you only do it once, it’s well worth doing a full-distance endurance race.

(But then I would say that, wouldn’t I? I’m the guy who decided to race for 24 actual hours in Gran Turismo 5 many years ago, keen to make a name for myself in virtual endurance racing. Even if that name was ‘Virgin’ and uttered only by scathing YouTube comments.)

Goodness, and I haven’t even mentioned the handling yet: it’s good. Sorted.

The kind of good that turns a quick practice lap into an evening-long hotlap session, because the novelty of how satisfyingly weighty the car feels through corner phase hasn’t worn off yet. The kind of good that makes you feel, in your best moments, supremely confident you’d be able to take a Lamborghini GT3 car around Paul Ricard every bit as quickly in real life. Twitchier than Project CARS 2, more responsive than rFactor 2, but somehow more convincing than either of them. Good, good, good. 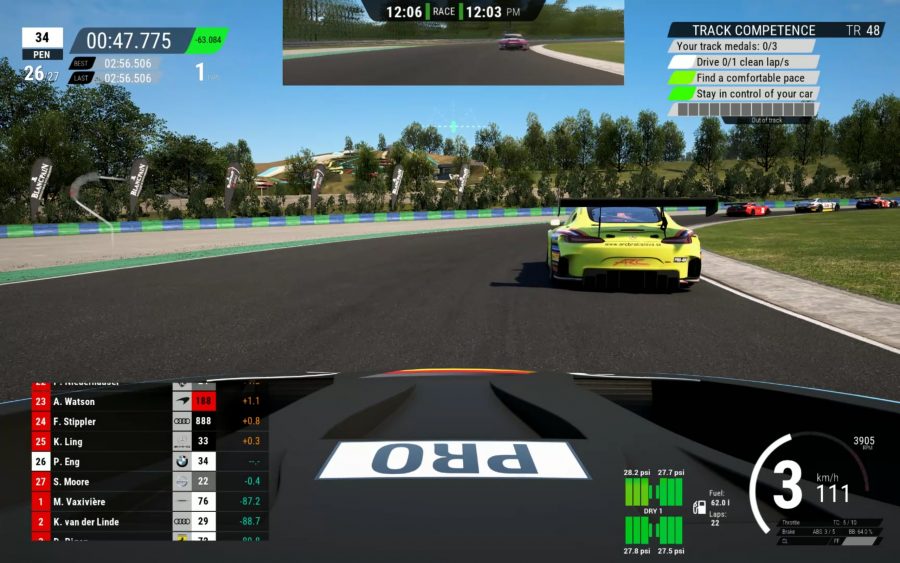 That’s if you’re using a wheel. If you don’t have a wheel, forget it. AC:C is genuinely undriveable using the keyboard, which will upset the seven people in the world still using keyboards to control driving games, but it’s also close to undriveable with a gamepad, and that’s going to upset slightly more people.

Blancpain cars are wide, twitchy things that clutter the track, which is excellent

Admittedly it’s very rare to use a pad among serious sim racers, but there’s arguably a larger audience below that tier of competence and commitment who want a substantial racing experience without having to build the salient components of a car in their bedroom in order to interact with it. Sometimes I don’t want to set up my wheel: I’ll play Project CARS 2 with an Xbox One controller, because it’s fast to get into a race, and because it still feels great to control the cars when I do. In AC:C you can’t even remap pad controls.

Multiplayer is as yet a bit of an unknown. Like its peers in sim racing, AC:C implements a matchmaking system that pairs clean, quick drivers against each other and in theory lets the crashers lollop around together away from those who want to take it seriously. At present it’s still a bit too early to tell how well this system works but what I can say is a) it already works better than the acrid, choking garbage fire that is Gran Turismo Sport’s penalty system over on PS4, and b) the majority of AC:C racers are courteous and take events seriously. 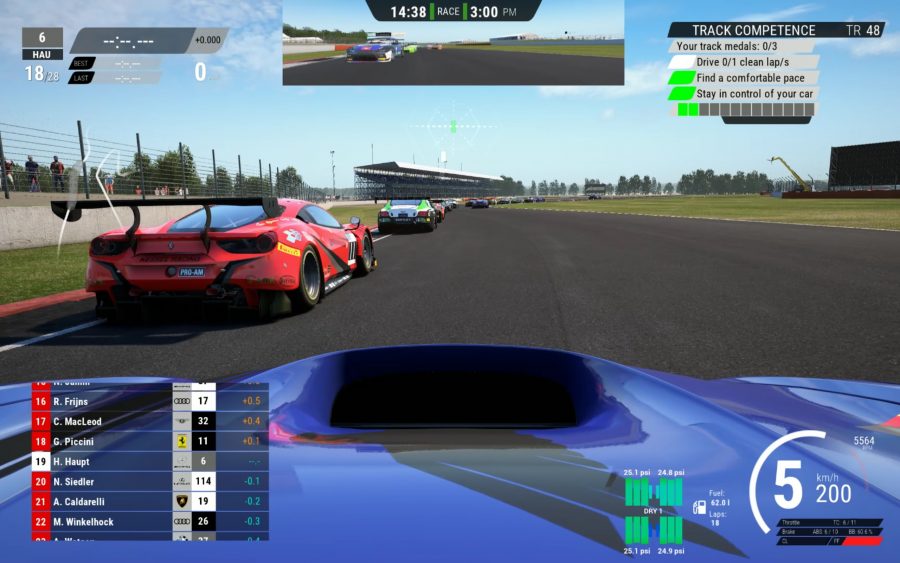 It’s a firm foundation for long-term sim racing that Kunos Simulazioni has shaped over AC:C’s Early Access and release phase. But will it function as a springboard for real racing hopefuls? There’s no serious esports infrastructure at present, but perhaps Kunos is mindful that you can’t force that on a game – the interest and the returning player base has to be there before the fancy spectator modes and regular events roll out. The feeling in my gut, and my poor bruised thumb muscles ravaged by Spa’s apexes, is that it will prove popular enough for a sustained community. A community with a high standard. Leaderboard positions are going to count for a great deal here.