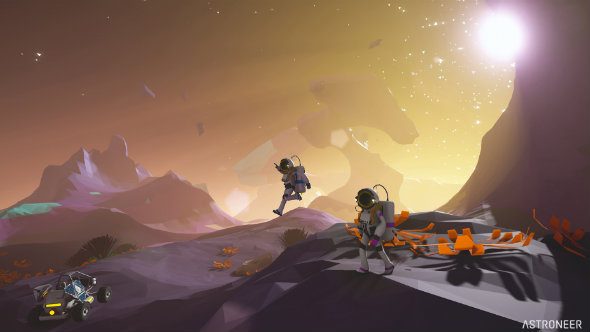 For just $19.99 on Steam, you can sample Astroneer in Early Access, carving up planets, building bases and bombing across rocky terrain in a buggy. So far, things are looking good for the game, with Steam reviews currently sitting at “very positive” and with 476 reviews in the bag already. Hopefully this bodes well for its year in Early Access.

Update December 12, 2016:The release date for Astroneer has finally been confirmed, and the low-poly surival game will blast off into Early Access on December 16. That’s in less than a week, that.

Yep, we’ll all be terraforming planets, building bases and speeding around in space buggies this Friday. It’s going to be in Early Access for a while, but the developers say the base game is there, with exploration, terraforming, survival and co-op pulled to the fore. It looks lovely, as you can see in the brand new developer let’s play above.

“[Astroneer] places players in a 25th century gold rush where they explore the frontiers of outer space, risking their lives and resources in harsh environments for the chance of striking it rich,” says the official blurb.

“Resources extracted from planets, asteroids, and moons can be traded with friends or crafted into new tools, vehicles, and modules. Environments are procedurally generated in a uniquely rendered voxel engine, featuring a textureless aesthetic that allows players to deform and shape the terrain as though it were made of Play-Doh.”

Original Story September 22, 2016: You’d be forgiven for feeling like you’re done getting excited for space survival games after the recent batch, but Astroneer genuinely looks like something different, with its low-poly aesthetic, vibrant colour palette, terraforming tools and impromptu buggy races.

The thing about Astroneer is, it just looks fun. It’s a space sandbox and it’s playful, giving you the tools to shape the environment how you see fit, raising and lowering terrain, creating bridges and shelter from storms, and even building your own base with your friends.

Because this is 2016, you can fly between planets too. If you ever get annoyed with the sandstorms of one planet, build a ship and fly to another. Think of the possibilities of Minecraft, then add a bunch more on top and you have Astroneer.

Luckily, we’ll soon be able to see if it lives up to its potential, as it’s launching in Early Access this December. Why not celebrate with this lovely new trailer: