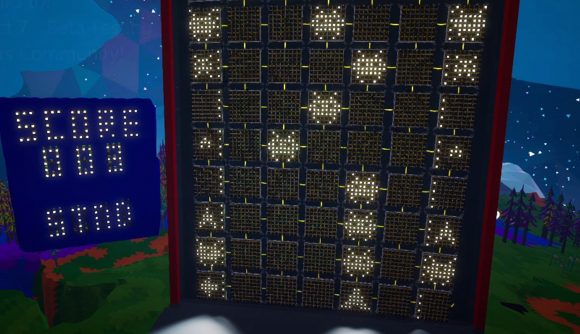 Despite being basically space-Minecraft, it feels like we hear about people making crazy things in Minecraft a lot more than Astroneer. Now one talented creator has addressed this imbalance by building a giant, functioning, playable Space Invaders cabinet in the game – complete with score and multiple increasing difficulty levels.

Streamer and computer engineering student Tyler Hill has completed his ‘Astro Invaders’ project by making a fully functional Space Invaders arcade machine within Astroneer. You can check it out working on his YouTube here or in the tweet below, and if you’ve got the game Tyler provides a save file so players can try it out themselves.

There are switches to up the difficulty, reset the machine and the scoreboard – oh yes, there’s a working scoreboard too – and the ability to move the little Space Invaders spaceship and shoot the descending aliens. It won’t quite be troubling Taito, but it’s still a ridiculously impressive achievement – and even more so once Tyler lifts the hood and shows how he did it.

According to Tyler, the machine required 3500+ floodlights, 1000+ power switches, 500+ button repeaters, around 300 delay repeaters, 200+ QT-RTGs, thousands of cable pins, and took him around 60-70 hours to build within Astroneer’s systems. You can check out the full details in the explanation video, but the moment Tyler flies his character around the back of the arcade cabinet and reveals the entire Tron-like city powering the thing you’ll be even more impressed – by the sounds of it, just animating the aliens took a lot of work.

More information (and GIVEAWAY 🎁) below pic.twitter.com/czIR1macS3

It’s rare for Astroneer to get something this impressive, but players have been making ridiculous machines within the more popular Minecraft for years – from a simple game of Uno to a complete virtual PC that can play Doom.