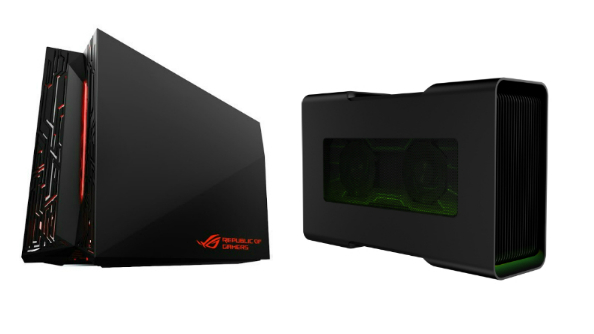 On the left hand side of the above image, you’ll see the ROG XG Station 2 from Asus. On the right, the Razer Core. Both are graphics card enclosures designed to hook up full-fat desktop cards to laptops via Thunderbolt/USB 3.0 connections, unveiled at CES 2016. Both are evidence that Asus and Razer clearly have confidence in the concept, so it’ll be interesting to see what kind of mark they can make on the mobile device market when they’re released later in 2016.

You know what runs on just about any laptop without the need for breakout boxes or enclosure? Good old Minecraft. Check out the best Minecraft mods, why doncha.

That’s by no means a subtle knock on the capabilities of either enclosure, by the way. In fact, the specs of each are impressive. Razer’s sleek Core features a 500W power supply to feed the juice to any two-slot graphics card up to 310mm long. It can send those piping hot graphics to your laptop at 40 Gigabits/second via USB Type C or Thunderbolt Type C.

The ROG XG Station 2 is fundamentally similar in design, though it’s apparently tailored in particular for Asus graphics cards while maintaining compatibility with any two-slot GPU. Ituses PCI-E x4 over two Thunderbolt/USB Type C connections to deliver those delicious pixels back to your laptop, and can even charge said lappie while you’re at it.

Both also have the impressive capability to not crash your system entirely when they’re plugged in or out on the fly. If you’re running a game or app that’s rendering 3D graphics, the program itself will crash, but Windows will keep on truckin’. Neither require any form of modified or bespoke driver, although your laptop’s BIOS will need to support Intel graphics switching so it can revert to the CPU’s graphics tech when the add-in card is disconnected.

None of these specs present any kind of problem, but in their information materials, both manufacturers do rather sweep past the conceptual contraction in terms that these encolsures present. I don’t want to be overly sarcastic or dismissive, but there’s something about connecting an enclosure the size of a Steam Machine to a mobile device so it can play games really well on a small screen that doesn’t scream “widespread adoption” at me.

It’s an avenue to pusue if you have a laptop that isn’t quite up to the job with new games, and don’t want to buy a whole new machine for gaming. And you don’t mind doing that gaming on a small laptop screen.

The idea of turning your old uni lappie into a Witcher 3-eating mega rig is certainly appealing, but for now neither Asus nor Razer have announced pricings of their enclosures, and that’s going to be a big factor in the viability of their whole concept.