Asus has announced when the ROG gaming phone will be available, and just how much damage it will do to your bank account. This ultimate gaming phone will be available to pre-order from October 18, 2018, and will start out at $899 for the basic 128GB device. Asus will also launch a heap of accessories alongside the device, although some of these cost nearly as much as a phone by themselves.

With a 6-inch 2160 x 1080p 90Hz AMOLED display, capable of Gaming / Mobile HDR, the ROG Phone is seriously kitted out to compete with the best devices on the market. Similarly, the phone features a Qualcomm Snapdragon 845 CPU, specially binned for Asus, and an Adreno 630 GPU. As is the standard for flagship mobile phones, Asus has fitted the ROG Phone with a more than capable camera: the Sony IMX363 12MP.

What separates this phone from the rest, however, is the functionality specifically built to cater to hardcore mobile gamers. That includes: Two AirTriggers, GameCool vapor-chamber cooling, haptic feedback, side-mounted ports, mounting for cooling or docking accessories, and, of course, RGB lighting.

The whole package, phone and accessories included, would amount to a stunning $2,129 all in. Although that’s maybe a few too many docks for one person to take advantage of. Realistically, an average consumer may only opt for one or two of the Asus phones numerous accessories, but even a single extra gadget can set you back up to $400. 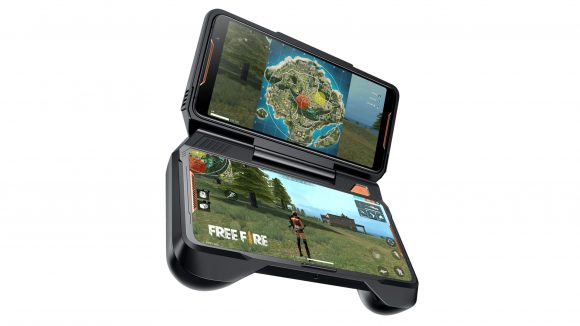 That’s the Twinview dock, the most expensive of the bunch. This accessory features a 6000mAh battery, four speakers, haptic feedback, enhanced cooling, and physical buttons to help you mercilessly slaughter your opponents with what some might consider an unfair advantage.

The WiGig Dock is similarly a pricey accessory, claiming $330 of your hard-earned dollar. This wireless ultra-low-latency box comes fitted with Qualcomm 11ad technology for 60Hz connectivity, and connects up to your TV for multi-screen wireless gaming. Sadly, that price tag will almost certainly prove too big a hurdle for many to experience what it offers.

The ROG Phone, too, is not cheap. While I found it to be responsive and well-designed during my hands-on at Gamescom, $899 is a tall order even for the most dedicated mobile gamers out there. But if Apple has proven anything, it’s that price is often no object for the mobile market, and the ROG Phone has a headphone jack at least.

It’s also an exceptionally large amount of money to drop on a games console, which, as a phone/console hybrid is a market the Asus has to be wary of pricing itself out of with the ROG Phone. The Nintendo Switch is $300, and that’s a console that has found oodles of success. It also makes for stiff competition to the ROG Phone, which at three times the cost, has its work cut out to compete.

Nintendo also has third-party game developers on its side, and some of the most acclaimed first-party IPs on the globe. This unrivalled library of titles available on the go is a mighty mountain to climb for Asus’ latest venture.

I’m still unconvinced the ROG Phone isn’t just a Nokia N-Gage waiting to happen, but maybe there’s hope. We’ve all heard of mobile gaming ‘whales’ that account for an ungodly portion of in-game purchases alone, and, similarly, maybe Asus’ hope is for those same whales to invest in the ROG Phone and make it all worthwhile. If you are one of those whales (sorry), or simply in the market for a new phone and have a penchant for mobile gaming, then the Asus ROG Phone will be available for pre-order in the US on October 18.