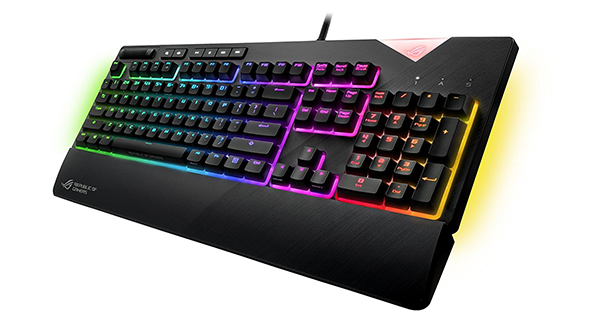 Asus are back at the keyboard game again with the ROG Strix Flare – an unashamedly ROG – but otherwise rather standard entry into the Cherry-powered gaming keyboard market.

Tired of mushy keys? Here are the best mechanical keyboards.

The Asus ROG Strix Flare design is unabashedly stylised for 1337 gamers – although that should come as no surprise due to the Republic of Gamers branding plastered all over this keyboard’s plastic enclosure. From the logo on the wrist rest, spacebar, and emblazoned translucent ‘badge’, you really can’t avoid the gaming lineage this keyboard spawns from.

Aside from the overt branding, the main visual feature of this keyboard is a ‘steel grey’ finish. For the record, and despite the implication, it’s actually plastic. This facade features a subtle diagonal brushed effect on the right side that does aid in creating a more premium feel than most plastic boards, but doesn’t quite make up for the lack of metal at this seriously high-end price point.

A wrist rest has also made its way into the Flare’s box. The sloped design of this included rest offers very little when it comes to actual wrist support and, honestly, slightly detracts from the style of the board when slotted into place. It also offers little in the way of comfort due to its plastic construction, and that’s disappointing when compared to the plush rests of similarly priced units, such as the Logitech G513 or Razer Blackwidow V2. 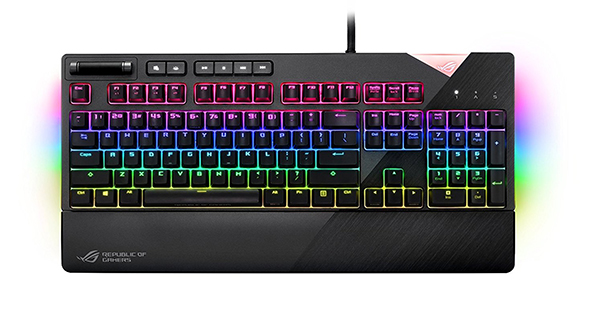 Speaking of pricing and competition, the Asus ROG Strix Flare is priced at $180 / £163. That’s a touch more expensive than the pacesetting Corsair K70, or Logitech’s popular Romer G alternative, the G810.

But, for that money, you do get some of the best of the best when it comes to mechanical switches. Asus have adopted the ubiquitous Cherry MX switches for the Flare – available in either Red or Brown (linear or tactile) variants. Look, I hear you… we’ve gone on about these switches before, and undoubtedly you’ll hear us go on about them again, so here’s a quick breakdown of Cherry MX switches for the uninformed: responsive, consistent, reliable, and insanely popular.

The inclusion of Cherry’s switches is never a bad thing – they keep churning out consistently rock-solid switches and we gobble them up. However, any keyboard featuring their popular switches really needs to be packed full of standout features to even surface momentarily among the ocean of comparable and competing gaming boards also vying for the top spot in this segment. The Flare, however, only has one really notably defining feature. 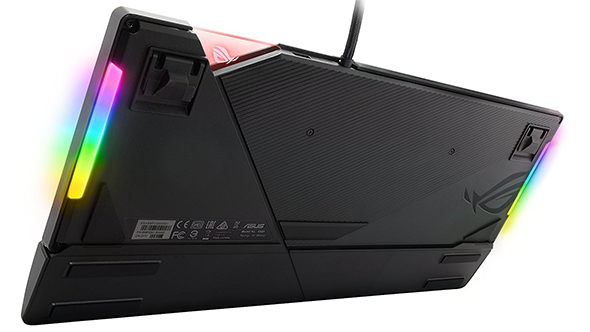 And that’s the media controls. Well, the location of them, at least. They’re on the left. The Flare comes with a conveniently wide volume wheel, Windows lock, brightness adjustment, and play, stop, skip back, and skip forward buttons, but all mirror-flipped from the top right (as is popular convention) to the top left. It’s not quite a design revelation, but it makes a lot of sense when your right hand is taken up with mousey responsibilities.

The RGB implementation of the Flare isn’t all that defining, however, but it’s not lazy either. Per-key lighting is contrasted against a white backing layer above the PCB. There are two multi-zone underglow bars running parallel on either side of the keyboard. And a removable translucent ‘badge’ in the top right features single-LED illumination.

These many LEDs are controlled through the Asus Armory app, in which you’ll find a sizeable collection of default lighting effects and options to customise your own effects. The app itself is a little dated, and also restricted to only ROG mice and keyboards. Due to this limitation, to sync up any other Asus components in your rig you’ll need to utilise the slightly more limited Asus Sync software in lieu of Armory. 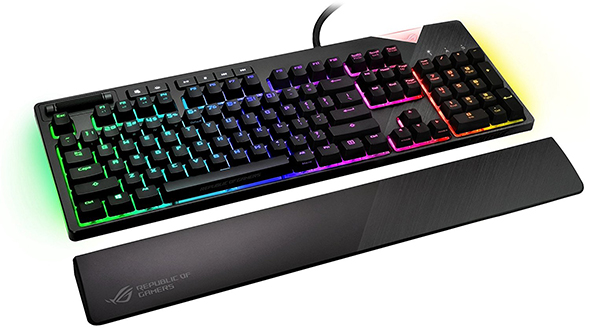 The technical specs of the Flare are also pretty run-of-the-mill at this price range. These include: 100% anti-ghosting and N-key rollover, onboard memory for local profiles, one cable routing groove, and a single USB 2.0 passthrough on the rear of the board, next to the thick braided dual USB cable for keyboard and USB.

As a complete package, it’s hard to fault Asus’s quality control. Unfettered access to high-quality manufacturing is one feather in Asus’s cap that few can match, yet the design isn’t quite pushing the boundaries of keyboard design in 2018. Cherry switches and ROG branding certainly garner respect and loyalty en masse, but will only get you so far in an extremely saturated gaming keyboard market.

As it stands, the Asus ROG Strix Flare is on the cusp of competitive, but not quite there yet.