Asus ROG has announced a gaming mouse complete with an integrated joystick over at Gamescom 2019. In lieu of thumb switches, the ROG Chakram mouse is fitted with a programmable, and removable, joystick capable of quick access programmable shortcuts or full analogue control.

In digital mode the mouse allows you to swiftly access extra shortcuts in-game, a slightly different approach to the usual thumb switches found on most gaming mice. However, what could really set this mouse apart is the Chakram’s analogue mode, capable of 360 degree motion with a 256 step resolution.

Asus posits the Chakram as the gaming mouse for flight simulation games, which is good news for anyone hoping to check out the latest Microsoft Flight Simulator before inevitably investing in a multi-monitor sim rig. It’s a slippery slope, folks. And Asus also sees it coming in handy in games that suit both keyboard/mouse and gamepad controls, such as GTAV across third-person and vehicle gameplay, and for FPS tilt controls popularly mapped to mouse controls in battle royale titles.

Included with the Chakram are two lengths of joystick and a cover to completely remove the thumb stick if preferred. It also comes with USB 2.4Ghz wireless dongle storage, Bluetooth connectivity, a removable magnetic vanity plate, Qi wireless charging, and interchangeable switches for the two primary mouse buttons. Neat. 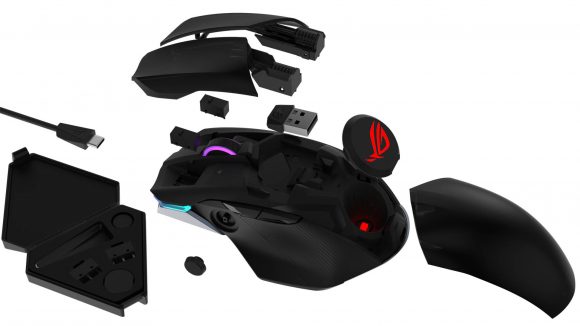 The sensor is also capable of up to 16,000 DPI because that’s entirely necessary, apparently.

But the Chakram is certainly a distinctive concept, and one that may spurn competitors in the gaming mouse industry to follow-suit if it can prove its worth here.