April 30, 2021 Asus is competing with Eve to release the first HDMI 2.1 gaming monitor, not to launch the first 4K display at 144Hz. Asus already achieved the latter in 2018 with the ROG Swift PG27UQ. We apologise for any confusion the original headline may have caused.

Choosing the best gaming monitor is always a daunting task. Do you focus on a high resolution and sacrifice the refresh rate, or go for one that’ll show every frame when you boost fps? This is a compromise you’ll no longer have to worry about, as a wave of 4K resolution displays are set to land on shelves in May, sporting 144Hz refresh rate courtesy of the new HDMI 2.1 standard, but the crown of who’ll be there first is hotly contested.

Asus already dubs its Strix XG43UQ as the “world’s first HDMI 2.1 gaming monitor” in marketing literature, with the rather ambiguous month-long release window of May. It might’ve jumped the gun, however, as Eve tells us it intends to swoop in and steal the title after it completes the Spectrum 4K’s final round of community prototype testing.

Neither have a solid launch date in place at the moment and both have been delayed several times with various lockdowns, so it’s anyone’s guess as to which you’ll be able to buy first. Asus originally wanted to debut the Strix XG43UQ in the fourth quarter of 2020, and Eve had December, February, and April 20 in its release calendar before now.

The Asus Strix XG43UQ is built for those with a bit more room at a mammoth 43-inches and is HDR-driven with Vesa DisplayHDR 1000 certification. The Eve Spectrum 4K, on the other hand, will fit on top of most of the best gaming desks with a more manageable 27-inches, but it hits a peak of 750 nits with a Vesa DisplayHDR 600 rating. 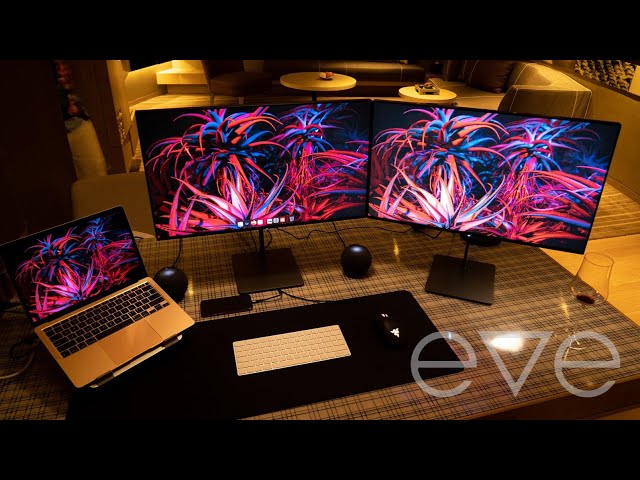 You’ll only be able to achieve these resolutions and refresh rates with the best graphics card, anyway, and it’ll take you far longer to get your hands on a good GPU with stock issues expected to ease next year. All you can do in the meantime is marvel at the footage of the Eve Spectrum fully running with a HDMI 2.1 connection and hope the wait isn’t too much longer.

Update: To clarify a previous headline error, Asus released the ROG Swift PG27UQ in 2018, which is the world’s first 4K resolution monitor with an overclockable 144Hz refresh rate. It uses a DisplayPort 1.4 connector to achieve this combination, as will its 32-inch PG32UQX successor, which will land on shelves at the end of May, 2021.