Asus has promised to fix thermal issues across its ROG Strix RX 5700 XT and ROG Strix RX 5700 graphics cards. Following user reports (complaints?), Asus discovered a lack of GPU to cooler pressure has led to an increase in temperature beyond what you’d expect from a Strix model. The fix is relatively straightforward, however: chuck out AMD’s naff guidelines and fit new mounting screws.

AMD recommends a PSI of 30-40 PSI between thermal solution (Max Contact heat spreader in this case) and GPU (Navi 10) to ensure reliability and performance margins. According to Asus’ blog post (via Overclock 3D), its Asus ROG Strix RX 5700 XT was built to follow these guidelines, shared directly with its engineers by AMD.

However, following user reports of high temperatures, Asus has decided to throw out the rulebook and build AMD Navi graphics cards to its own specification – in fitting with modifications that owners have been installing independently to combat temperatures. Asus’ new guidelines outline acceptable pressure between 50-70 PSI.

“As a result, all ROG Strix Radeon RX 5700-series graphics cards shipped from January 2020 forward feature new screws that increase cooler mounting pressure to 50-60 PSI, resulting in improved heat transfer from the GPU to the heatsink.” 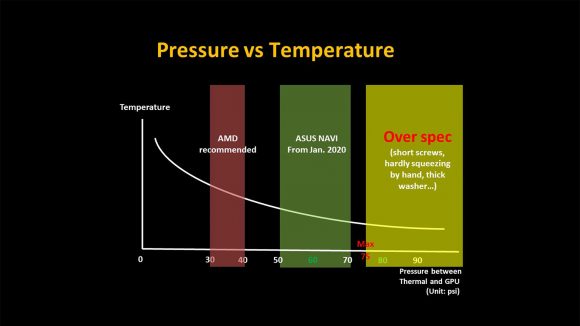 All cards shipped from January onward will be fitted with the new screws, which should combat the rise in temperature.

If you’ve already purchased an ROG Strix RX 5700/XT, Asus is promising a free upgrade to some new and improved mounting screws. It’ll be rolling these out to its service centres from March 2020, pending any delays due to uncontrollable circumstances affecting its supply chain.