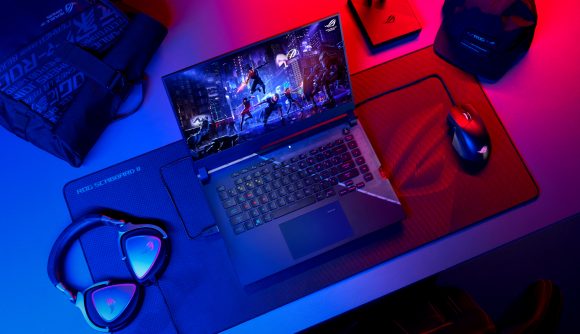 It’s an exciting time to be hunting for a new gaming laptop, with AMD Ryzen 6000 and 12th gen Intel Core H-series mobile CPUs now available on the market. In a bid to make the most of this brand-new processing power, Asus has crafted the ROG Strix Scar gaming laptop, and it could outperform many gaming PCs.

Asus says the ROG Strix Scar has been made with “esports enthusiasts” in mind, and its specs certainly suggest zero compromises were made during its design. Featuring up to a top of the line 12th Gen Intel Core i9-12900H CPU paired with an Nvidia GeForce RTX 3080 Ti graphics card, this portable powerhouse should have no trouble running practically any game at high settings (esports or otherwise) with dizzyingly high frame rates.

There are three flavours you can grab the ROG Strix Scar in, with the 15-inch models offering a choice of a 1440p/240Hz or 1080p/300Hz displays. If that’s not enough screen real estate or refresh rate for you, the 17-inch model pushes things even further with a 1080p/360Hz option while retaining the 1440p/240Hz configuration.

Packing all of this power into a chassis that’s less than an inch tall understandably requires some serious cooling, and Asus claims it has an effective solution. Thermal Grizzly Conductonaut liquid metal thermal compound should keep the ROG Strix Scar’s CPU up to 14°C cooler than “traditional thermal pastes”, all while maintaining 40db of fan noise in performance mode.

You’ll be able to pick up the ROG Strix Scar from February this year, but the best gaming laptops don’t come cheap, and it starts at $2,499.99 USD (and that’s for the RTX 3060 specification). Thankfully, Asus have updated several of their other portable PCs with the latest tech from AMD, Intel, and Nvidia, including the renowned ROG Zephyrus G14.