Atlas Reactor, Trion’s crazy turn-based multiplayer game, is certainly an exercise in experimentation. And if you didn’t think its approach to simultaneous, multi-phase combat turns was progressive, perhaps the seasons system will convince you of the game’s boldness. Because in Atlas Reactor, simply playing dictates where the game’s lore will go next.

Looking to buddy up and take on the world? Look no further than the best PC multiplayer games.

“At some point through a season we have a decision situation where players actually determine the outcome of the lore, which can do some crazy things,” reveals Joe Brogno, Atlas Reactor’s community manager. “It can decide the lore, it can decide the next character we release, maybe even the next map. So players have the ability to affect the game directly, all just by playing the game.”

Each of the three-to-four-month seasons introduces more lore to the Atlas Reactor universe. The current season focuses on trusts: massive corporations battling for power using freelancers (the characters you play in Atlas Reactor) as their pawns. Known as Trust Wars, this season has introduced a new points-winning mechanic that asks players to rally together to unlock rewards.

“You can get yourself in one of the trusts and earn them points,” says Peter Ju, executive producer on Atlas Reactor. “There are winners and losers, and the losing trust may be gone for a while. They could be dropped out the lore for a time.”

Players join trusts simply by choosing a banner background for their account. The numerous banners all represent one of three trusts: EvoS, Warbotics, or Omni Trust. Each of these corporations have a set of five rewards to unlock. The more people representing a trust, the more points that will be poured into their pot, and the faster players will be able to access those bonuses.

Choosing a trust doesn’t lock you out of rival rewards, though.“Even if you are playing for EvoS, you actually have access to all the Omni stuff as well. It doesn’t matter which trust you choose, you will have access to all of them. You just won’t get them as quickly as you would if you were all invested in the same trust,” explains Brogno. 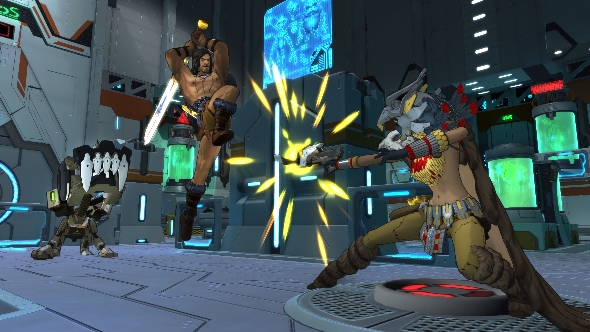 You’re not bound to a trust at all; you can swap between them at any time simply by changing your banner. “It depends on what you like and what you want to get quicker. Once you max out on one thing, you can change trust whenever you want. It affords the flexibility that players are looking for,” says Brogno.

You can easily imagine players rallying together on forums, with large chunks of the community dedicating themselves to one trust to quickly unlock something. Rewards include Trust Style Loot Matrices that contain cosmetics for your freelancer characters. The spoils of war may be merely fashion and not function, but we all know people will go crazy for the coolest gear.

Atlas Reactor is available now in both free-to-play and buy-to-play forms. To jump in, just head to the Atlas Reactor website and try Free Mode 1.0.