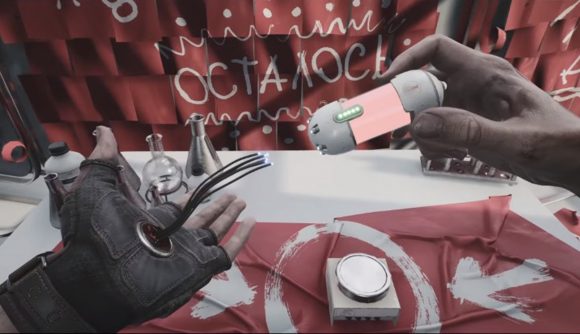 After a year we’ve finally gotten another trailer for soviet-punk BioShock-like Atomic Heart, and it’s looking as wild as ever. From a giant mechanical worm to piles of mold that appear to be made of water you can swim in, this is shaping up to be one of the more distinct large-scale action-adventures on the horizon.

Let’s start with the worm: the 4k gameplay teaser opens on a couple of tranquil images before focusing on a massive, mechanical drill-serpent as it dives across the sky. We see it again later, coiling through a corridor. Presumably the thing just shoots up for air every so often to terrify onlookers before re-entering to resume making tunnels or whatever it’s up to.

Then we go into a montage that showcases more of the soviet-inflected tech scattered around Atomic Heart’s world. There’s the hopping ball that’d seem playful in any other context, and a little yellow hovering drone looking thing that can construct other robots at will, creating the axe-chopping enemy the player battles later. You can swim in the piles of gravity-defying transparent goo, and almost everything has a creepy face, because of course.

This is the first formal teaser since the 10-minute trailer from January 2019. In the intervening year, Mundfish has put out an interview with one of its veteran developers, and a look at one of the planned in-game cinematics.

Even for a short tease, this peaks interest with all the vibrant, strange goings on. It ends on some mutated tree-looking monster, like an Ent from Lord of the Rings by way of Silent Hill, so that’s exciting (read: nightmare-inducing.)

Details are still scant – there’s no release date – but it’s good to be reminded Atomic Heart and its beautiful, nightmarish world exist. While we await further updates, do have a look at our lists of the best RPGs, best free games, and best new games in 2020 to keep yourself occupied.