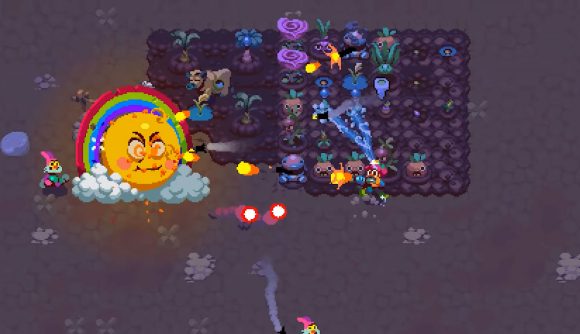 Stardew Valley shooter Atomicrops is heading to Early Access on the Epic Games Store next week. Announced in a press release today, the “roguelite” farming sim that sees you mix raising crops with blasting mutated enemy creatures looking to invade on the “last farm of the post-apocalypse”, will offer a big discount for those keen to jump in early.

As revealed earlier this year, Atomicrops is due to release as an exclusive on the Epic Store, and today it’s been announced that it will enter Early Access on September 5 – just a week away. You’ll be fighting to save and sell your “ultra-GMO crops” in no time.

The release also states that, as “Early Access means building a community with folks from all over who want to help shape the development of the game,” with support from Epic, its devs Bird Bath Games are “able to offer something nifty to anyone prepared to shoot first and harvest vegetables later – Atomicrops will be available for 50% off when it launches!”

Following this, the store will offer a “descending discount” over the course of one week, which means that the discount offered will be a little less each day. So, if you’re keen to get stuck into the game “that wants to you to farm, marry, kill”, the earlier you buy it, the bigger the discount you’ll get.

If you’re keen to see what Atomicrops is all about, check out the Early Access announcement trailer above.

If you want to grab the game when it hits Early Access next week, head to the Atomicrops page on the Epic Games store and get ready to take farming to the next level.