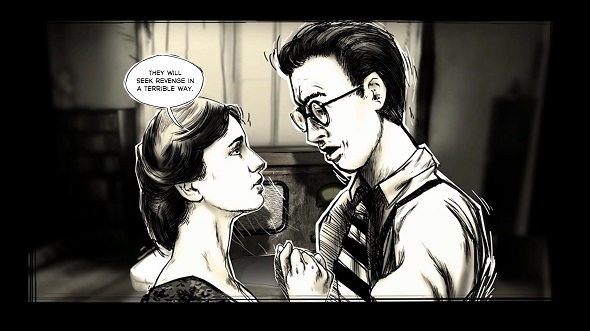 Attentat 1942 is a unique game that uses live-action video, archival footage, and scholarly research to tell the story of the Nazi occupation of the Protectorate of Bohemia and Moravia, or the modern-day Czech Republic. It was recently honored at Berlin’s A MAZE gaming festival with the “Most Amazing Game Award,” but due to its inclusion of Nazi symbolism, the game is unavailable to the German public.

Here’s our list of the best World War II games available on PC.

Germany has strict laws governing the display of Nazi symbols, particularly in videogames, and since Attentat 1942 deals with life under the Reich, collecting the recounted memories of the occupation’s survivors, swastikas can be seen at many points in the game.

“Attentat 1942 shows the profound impact that the war and the Nazi totalitarian regime had on the lives and minds of ordinary people,” said lead designer Vít Šisler. “It immerses players in the living histories of personal tragedy and pain as well as moments of extraordinary hope and courage.”

It’ll be a shame if German gamers miss the chance to play Attentat 1942, since it’s not only an innovative approach to exploring history through the games medium, it’s also a game about spending time talking with and learning from the survivors of some of the darkest days of the 20th century. You can read my review over at our sister site, The Wargamer.

Both the developers and the A MAZE festival organizers hope that they can find a way to get approval for its sale in Germany.

“This win could be an important step in getting Germany to officially accept videogames as a cultural medium with the same rights and obligations as other art forms,” said Thorsten Wiedemann, founder and director of the A MAZE festival.

Attentat 1942 was developed by historians and programmers at Prague’s Charles University and the Czech Academy of Sciences using grants provided by Czech Ministry of Culture and the Technology Agency of the Czech Republic.

Šisler says they’ll continue to look for ways to get their game approved for sale in Germany.