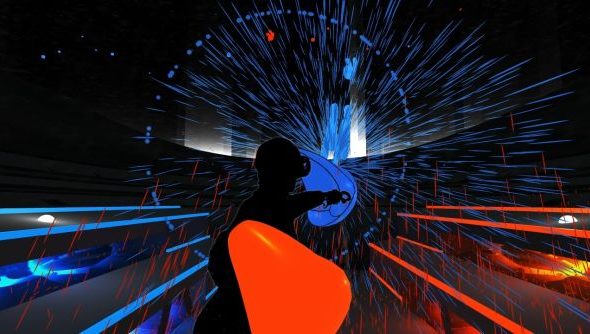 Audiosurf is, without a doubt, one of my favourite games ever made. Turns out to get me interested in VR all you have to do is take that and modify it a bit. Audioshield is the first thing I’ve seen do it and by far the most excited I’ve been about a VR game since this wild ride began. Made by the same developers, lines of colour sweep towards you and you must bat them away with the touch controllers of the Vive. It looks like a lot of fun, decent exercise and a very good excuse to ‘accidentally’ hit annoying family members in the face.

The Vive sales figureswould suggest games like this could do very well.

Here’s the trailer, showing off both the in-game view and the sort of movements you’ll need to make to perfect a song:

Everything I loved about Audiosurf’s mono-modes is present here – an excuse to listen to my favourite music, a simple challenge that’s easy to understand but scales up via the algorithm, and a level of manual dexterity that I can just about wrap my head around. I assume that the final version will be slightly more complicated, allowing for changing colours via controls in the touch pads, for example, or adding beams you have to dodge entirely. Even if this is all there is, I’d happily play it.

Probably not quite enough to get me dropping near a thousand dollars on the tech to do so, mind, but it’s games like this that add up to make the technology worth the price. It has the features from Audiosurf you’d expect, like online leaderboards for each song, as well as locals for comparing “with friends during look-at-my-awesome-new-VR-system parties.” It has Soundcloud integration too, if your personal collection isn’t very meaty.

A little more info and some screens over on Steam, where it will be releasing come April, presumably as a launch title for the Vive.