It’s left-click to hit a tree with an axe, right-click to drop it. I know this, intellectually. But the fingers aren’t so willing, and so I’ve buried yet another hatchet between the branches of a conifer. It wouldn’t be so bad if I could just pick it back up again, but a combination of two factors stand in the way of that obvious solution: first, Autonauts’ isometric perspective, and second, a blocky art style that renders the tree a uniform green blob. Because the axe lies beneath the blobby mass of said tree, I can’t see it from my bird’s-eye-view. And, since I can’t see it, I can’t select it. QED.

Time for Plan B. I’ve got to move the pine, and the only way to do that is to chop it down. But, and I don’t know if I’ve mentioned this, my axe is inside the tree. So I’d better go and find a stick to craft a new one. I think it’s a stick I need. It might be a pole.

Was Minecraft ever this frustrating? It’s tough to remember a time when I didn’t know that two sticks and three planks made a wooden axe, and yet I wasn’t born with that knowledge. Maybe that first half an hour with Minecraft was every bit as infuriating as the one I spent with Autonauts, flicking back and forth between an empty plot of land and a set of instructions in a browser.

Somewhere around the 31st minute into the game, though, I gasped with joy. That was the moment I taught a robot to cut down trees for me.

Autonauts, you see, isn’t really about logging and crafting. It’s about programming a fleet of ‘automationauts’ to do all of that for you, before sitting back and appreciating the efficiency of your operation.

Once I built my first bot I gave it the command to listen. In this state, autonauts mimic actions and take notes on absolutely everything: which coordinates to walk to, what tools to pick up, and what objects to hack at. At the end of it all they have a list of directives to follow and repeat ad infinitum. That means, if I can remember to left-click the tree just once, the robot will remember to do that forever, thereby sidestepping human error and making a strong case for the automated industrialisation of Planet Earth. 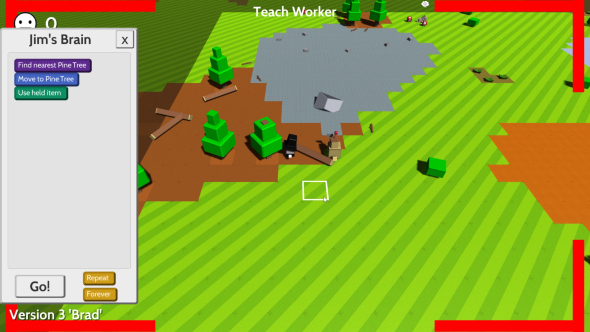 Let me tell you, fellow flawed human: it is glorious. Bot #1 chops down trees, just as I did. But, unlike me, it doesn’t make mistakes, or take breaks to parse the construction menu. Soon enough, it is amassing timber faster than I can bring it back to base. I decide, in my newfound wisdom, that the second autonaut will be a full-time logger. I can teach it to lift and carry the trunks left in its peer’s wake.

Ethen, I still can’t rest. Bots have batteries, and when given hefty tasks they regularly fall into a state of unresponsiveness. I need to keep an eye on them and occasionally give them a click to wake them back up. That’s why I create Bot #3.

The waker bot’s job is to watch the other autonauts and, if they run out of power, get them back on track. Because it rarely moves, Bot #3 rarely runs out of juice. It is the final piece in a perfect, if simplistic, operation. And I am the proud, lazy line manager to a bunch of employees I’ve built with my own two hands. 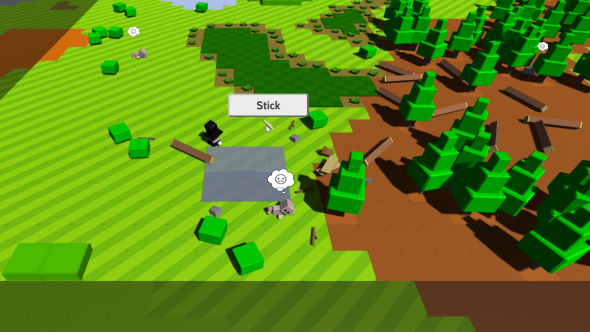 Shortly after this point, I am buried in logs. There is nothing slowing down the autonauts. They are moving far faster than my plans for woodworking. Like Mickey Mouse in The Sorcerer’s Apprentice, I’ve become the victim of my own cleverness, half-drowning in hyper-efficiency. But it feels good.

Autonauts is in a state of “pre-pre-pre-alpha”; as in the real-life logging industry, there are a lot of rough edges waiting to be smoothed. But I’m left wondering whether I want them to be. Would it be anywhere near as satisfying to manage a team of bots if the tasks I was automating weren’t such a faff to begin with? Truly, there is no rest without drudgery. Now there’s a reassuring maxim to take you through to Friday.