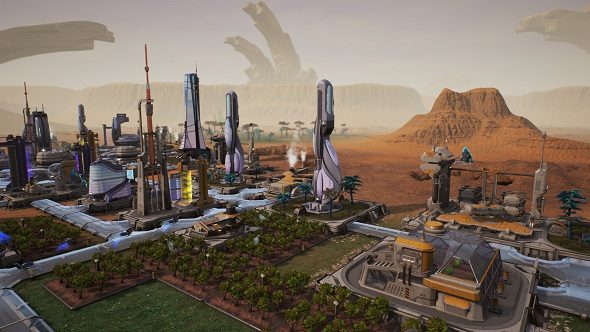 Along with a trailer released to coincide with GDC 2017, Team17 and Mothership Entertainment have released more information on the upcoming planet colonisation simulator Aven Colony. This new system details what happens when you send explorers outside of your central colony, to map more of the mysterious world of Aven Prime.

For city builders and simulation buffs, check out these other top PC sim games.

As a colony governor on Aven Prime, it’s your job to not only expand your fledgling colony, but to map out the rest of the planet and see just how hospitable it is for continued human expansion. To that end, you can send out special expeditionary forces to scout out the nearby areas and find potential spots for future colonisation.

Your expedition vehicles can repair crashed vessels and save lost explorers, along with discovering ruins and recovering artefacts from the previous civilizations found on Aven Prime. These expeditions can go awry, with ancient robotic guardians sometimes emerging to defend their territory from outside threats.

You can run into rebels and splinter groups that have separated from the main colony, who may need to be terminated with extreme prejudice. There are also deadly creep spore and plague spore nests that need to be eradicated, in order to stop your colony being overrun by lethal flora and fauna.

Success in these expeditions could help you rise in the ranks to the position of expedition president, so sending out regular scouting parties is good for the health of your colony.

For those who want to test out their skills as a colony governor ahead of Aven Colony’s full launch in Q2 of this year, the beta version is available for purchase on itch.io for $29.99. Purchasing this beta will gain you access to the full game on launch, and it will also be available via Steam.