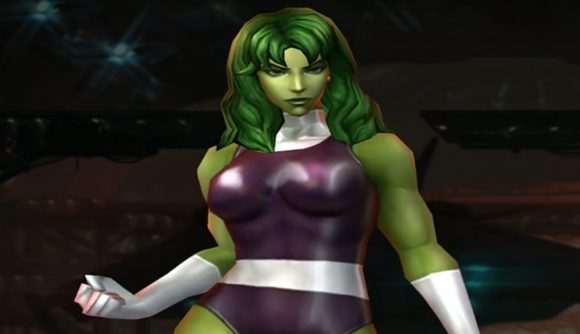 It’s been a long time since Marvel’s Avengers received an update with a new character – especially PC players, who missed out on Spider-Man – but now it looks like developer Crystal Dynamics is planning the next DLC hero to be She-Hulk, at least according to a leaker.

Things have been quiet on the Marvel’s Avengers front since the PS4/PS5-exclusive drop of Spider-Man last month, so fans are undoubtedly wondering whether the live-service game will get another character drop like War For Wakanda – and which Marvel hero will be joining the Avengers next.

Jennifer Walters/She-Hulk has long been rumoured as the next DLC character for Avengers following Black Panther after details were datamined earlier this year. Now, prolific Avengers leaker Miller has seemingly revealed that not only is She-Hulk coming next, she’ll be played by veteran voice actor Krizia Bajos – who recently appeared in the League of Legends Arcane animated series as Ximena and the upcoming Gotham Knights as Renee Montoya.

While this is by no means confirmation, Bajos apparently shared the tweet with an emoji of a green heart – pretty much confirming the news. She later deleted the tweet, presumably after someone pointed out that none of this had actually been announced yet. As for Miller, he has a good track record when it comes to both Avengers and the game’s voice actors, as he revealed that God of War actor Christopher Judge would be voicing Black Panther six months before it was confirmed.

Krizia Bajos will be playing Jennifer Walters aka She-Hulk when she appears in Marvel's Avengers pic.twitter.com/u5yinWl8vT

As for when She-Hulk will drop in Avengers, that’s not currently known as she hasn’t even been revealed yet – although she will be getting a Disney Plus series sometime in 2022 starring Tatiana Maslany as Jennifer Walters, so it would make sense for the character to appear in Avengers around the same time. Who knows, the game may even pick up in popularity again too.