Among the ashes of a once-great civilisation torn apart by a devastating war, mechanised beasts roam the world searching for the forbidden powers of dead gods. Brought back to life as a guardian, your goal is to defend the gods’ tomb from those who seek to harvest its unique abilities to create their own demented pantheon. That might sound a lot like the grimdark lore of a Warhammer 40k character, but it’s actually from Avernus, an upcoming game filled with robotic horrors lurking around every corner.

Developed by a five-person team at Subsolar Entertainment, Avernus is a top-down action-adventure game with an emphasis on aggressive, bloody combat. As Subsolar eyes a release on Steam next year, we spoke with game designer Markus Iskala and programmer Henri Sipola about why the team chose Unreal Engine 4, and how they dealt with a number of development hurdles.

The initial design phase for Avernus began back in 2016. “Avernus is the very first game our team has worked on and we had no prior experience on Unreal Engine whatsoever,” Iskala explains. “Slowly, step by step, we researched and overcame every problem the project threw at us: 3D optimisation, the Unreal Cascade particle system, post-processing… pretty much everything was new and mysterious.” There’s so much to consider when using a game engine, but Unreal Engine 4 has been built to simplify this process for newcomers.

The game's visuals aim to feel of ancient and dignified, yet manufactured

“The only reason we’ve made it this far is mostly due to the fact that Unreal Engine has very accessible and clear documentation,” Iskala says. With a desire to create their game in 3D and a team packed with artistic talent, the decision to choose Unreal Engine 4 over other engines ended up being an easy one. “Our team is very art-oriented, but because Unreal is so easy to approach, with just a little bit of research our artists can independently test and implement most assets by themselves,” explains Sipola.

Avernus’s dark tombs, built to house the remains of long-abandoned mechanical gods, create an unusual aesthetic which combines elements of sci-fi and the ancient world with bright bursts of colour. “The game’s visual presentation aims to give you the feeling of ancient and dignified, yet manufactured,” explains Iskala. “We set out to combine ancient Greco-Roman architecture with more simplistic Art Deco designs, using stone, steel, and gold as primary materials for the entire thing.” 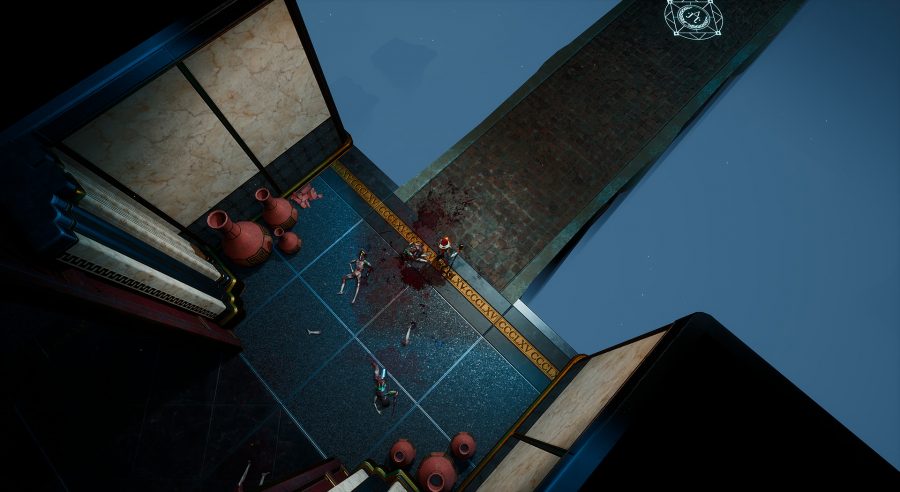 Fighting against enemies in Avernus creates colourful spectacles as you dash through grunts, working quickly to eliminate every threat in a room before you’re overwhelmed. While the gorgeous splashes of colour look stunning, they also serve a second purpose. “As for the strong use of colour, it feeds into the game’s futuristic themes and at the same time, can be used as a great tool to telegraph incoming dangers and other interactions for the player,” says Iskala. Enemies attacking with laser pistols will fire off glowing red blasts, indicating to the player that they can dodge past this type of attack using the warp ability.

All of these visual cues are important, because Avernus demands you make a risk vs reward calculation in combat. As you progress through the game, you’ll encounter enormous bosses that can provide you with game-changing abilities, but taking down one of these beasts is no mean feat. “The core gameplay of Avernus is all about precise movement and controlled aggression.” Iskala explains. Though it may be awfully tempting to continuously attack enemies, watching as quarts of crimson spill onto the floor, just one mistake can land you in a lot of trouble.

“The player is armed with an instant short-range teleportation ability, or warp, which consumes stamina to use,” says Iskala. “The only way to get stamina back reliably is by successfully hitting enemies with your combat abilities. To avoid damage, you must deal damage. This leads to an aggressive ‘dance’, where you’re constantly warping around your enemies and attacking them while trying to avoid everything they throw at you. At times this makes you feel almost invincible, at least until you overextend and run out of stamina, which usually then leads to a near death scenario.” 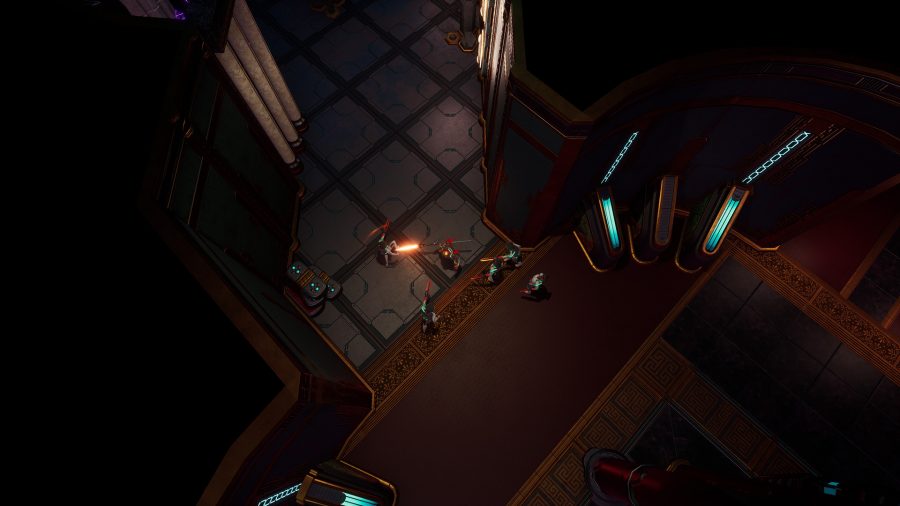 If that gameplay loop sounds familiar to you, it may not surprise you to hear the devs were influenced by some modern classics. “Dark Souls and other FromSoftware masterworks are a huge influence on this game, like they are for so many others,” says Iskala. Likewise, Hyper Light Drifter has been a huge inspiration for Subsolar,with Iskala referring to it as “a beautiful action-adventure indie game everyone should experience.”

Incredibly, despite the world sound like something out of the opening pages of a Warhammer 40k novel, the universe that coined the phrase ‘grimdark’ wasn’t a cognisant influence for the visual design of Avernus. It all comes back to colour for Iskala: “I’m a huge fan of Dario Argento’s giallo movies from the late 1970s, such as Suspiria and Inferno. The visual style of those movies resonate with my love for colour and contrast. I can’t really claim that those movies affected this game directly, but they are always a distant inspiration no matter what I’m doing.”

In this sponsored series, we’re looking at how game developers are taking advantage of Unreal Engine 4 to create a new generation of PC games. With thanks to Epic Games and Subsolar Entertainment.