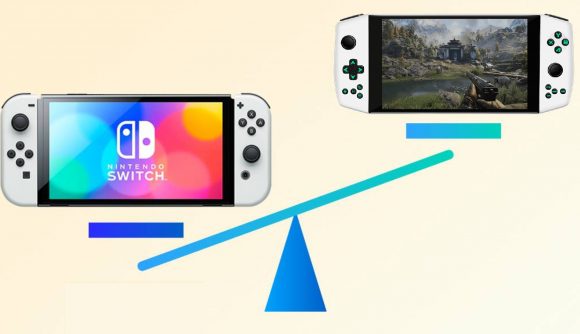 05/05/2022 – The Ayaneo Air will release “mid-May”, and the company has now shared some game performance expectations.

Ayaneo has announced yet another portable gaming PC, and the company claims it to be the “world’s first ultra-thin OLED Windows handheld”. Announced via Twitter, the Ayaneo Air is set to be cheaper and lighter than its predecessors, meaning it could compete with both the Nintendo Switch and Steam Deck.

According to a new blog post, the Ayaneo Air handheld gaming PC will aim to weigh less than the Nintendo Switch OLED model, which comes in at 420g. The device is also set to match the versatile console in size, with the company expressing it’ll be “light and easy to carry.” The portable’s own organic screen boasts an NTSC 109% colour gamut, bringing the vibrancy of the screen tech to a Windows machine without hooking up the best gaming monitor.

Ayaneo hasn’t given too much away about its handheld gaming PC’s innards just yet, but it does say it’ll use an AMD APU. The device’s “more beautiful price” suggests it might use a Zen 3 chip, rather than a Ryzen 6000 solution. That said, we don’t actually know how cheap the Ayaneo Air will be, so perhaps we’ll see a spec and price combo that place it in a different league.

While the Ayaneo Air takes a leaf out of Nintendo’s book when it comes to size, it may also draw inspiration from Valve when it comes to hardware features. Despite being dinky, the device includes an x-axis linear motor, something that will give it haptic feedback abilities. A slightly ominous section of the handheld’s reveal blog asks “have you ever seen a breathing joystick?”, implying that its sticks will be clad in fancy LED lighting, complete with effects.

The Ayaneo Air hasn’t got a release date yet, but the company says more information on pricing will be revealed during its May press conference.

Update: Shortly after unveiling its next handheld gaming PC, Ayaneo issued a follow-up tweet confirming the device will release “mid-May” 2022.

The company also shared performance expectations across various big releases, including Elden Ring and Fortnite. According to the list, Fromsoftware’s RPG runs on the portable at 720p 30fps with default settings enabled, while the Epic Games shooter can boost fps to 60 frames per second while using low settings.