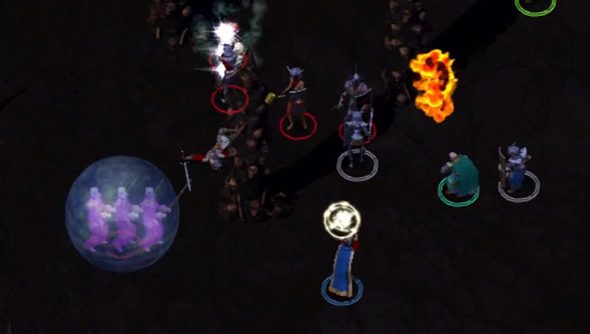 True fact: search “Nostalgia gland” on Google and the Baldur’s Gate logo is one of the first images to pop up (CAVEAT: there are many unsavoury images that will burn into your brain). So it seems justly fitting that watching the below footage of the newly released Baldur’s Gate: Enhanced Edition had me slide into my chair, drooling out the corner of my mouth remembering what it was like to be ten years-old and discovering Bioware’s seminal title.

According to Jeremy and Paul, who’ve both spent the past week up to their knees in dice-rolls and character sheets, BG:EE (as the kids call it) is an extremely good update of the classic RPG. You can read their thoughts here. Or these extracted, refined thoughts, here:

“Tim: If you haven’t played Baldur’s Gate before, do you think it’s worth picking up?

Paul:Well, of course I’m going to say yes, but it’s not simply because I’m both biased and nostalgic. There’s an enormous indie scene and a great love for retro gaming among PC gamers because we’re obviously the sort of people who want more than just hi-res textures and colossal polygon counts.

That said, I feel a fool even mentioning Baldur’s Gate and retro gaming in the same feature, because the Baldur’s Gate games don’t feel old to me. I still think they’re unsurpassed in their wit and their world-building and I know many gamers feel that Bioware have failed to make anything as good since.

I should add a caveat or two, though. Baldur’s Gate uses the antiquated Dungeons & Dragons Second Edition rules set, which can be a strange thing to get your head around and if you don’t know what calculations are going on inside this game, it’s harder to get a grip on. Also, it doesn’t give a damn about fairness or scaling encounters. You know how I said you start off in the wilderness? Well, guess what happens if you wander into the forest? Yeah, you die, because it has those wolves and bears. This is a world of magic and sometimes there’s a demon around the corner, a demon you still won’t be able to beat if you’re five levels higher. Sometimes the dice are unlucky and you roll a 20 instead of a 1. Baldur’s Gate is hard.

Jeremy:It’s very hard, andTrent Oster tells usOverhaul have done absolutely nothing to change that, though the game does default to a slightly easier setting than it used to.

Here’s the thing: if you’re an old hand you’re going to want to get this for the retroactive Baldur’s Gate 2 additions, the stacked arrows, the new party members and areas. If you’ve fresh, new hands, unweathered by barrages of magic missiles, you’ll buy BG:EE because it’s the most comprehensive version on the market, optimised for modern PCs. It’s enhanced, is what it is.”

So, there you have it, a good thing.

You can read more about the game and, if you’re that way inclined, buy a copy from here.