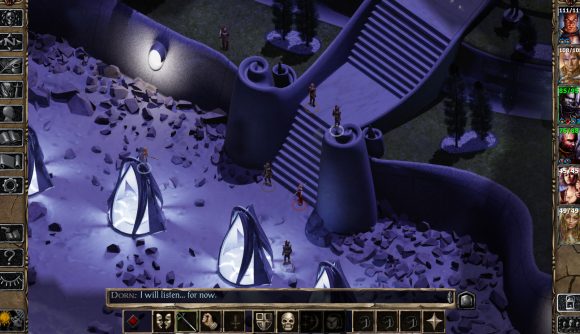 Beamdog, a publisher that’s worked on several remasters of DnD games, has something completely new in the works. Very little is known just yet about the upcoming game, other than it being confirmed by a member of the team.

On the publisher’s forums, a user suggested some potential RPG games Beamdog could work on next. In response, Julius Borisov, community and social media manager, says the company’s looking to strike out on its own with its next project. “While the door on remasters hasn’t been totally shut, currently Beamdog is working on a new game, its own IP,” He writes. “No details have been shared yet.”

Beamdog has been involved in a number of fantasy game re-releases over the last decade. It published enhanced editions of Baldur’s Gate and Baldur’s Gate 2, Icewind Dale, and Planescape: Torment, all developed by Overhaul Games, while developing and publishing updated versions of Baldur’s Gate: Siege of Dragonspear and Neverwinter Nights itself. Beamdog released Axis and Allies 1942 Online in 2019, based on the tabletop game, meaning licensed work has been the company’s bread and butter for the vast majority of its life.

We’ll have to wait and see what this first original project is. Meanwhile, Baldur’s Gate 3 from Larian Studios entered Early Access on Steam last October. Since then, it’s gotten a rather large patch that added druids.

Here’s a trailer for Axis and Allies 1942 Online:

Speaking of Dungeons and Dragons, Hugh Grant is playing the antagonist of the upcoming movie. Do with that what you will.