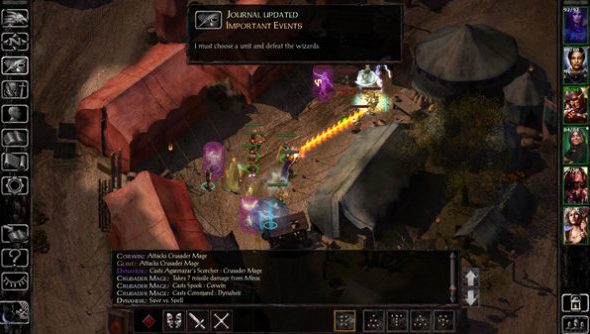 Remember the other week when certain people went absolutely mental because Baldur’s Gate, a game with dragons, magic and other fantasy guff, dared to include a transgender character? Well developers Beamdog have responded, explaining why they think the character was badly received and what they intend to change in response. Basically, you’re getting more of that character now, which is about the best news ever.

If you’d rather run around blasting things, have a look at our list of the best FPS games on PC.

“To us, having a transgender character wasn’t that big a deal,” Beamdog studio boss Trent Oster told Develop. “In a world where there’s half-orcs – so a human and an orc had an offspring together – and dragons can transform into humans and gods can walk the earth as male or female, whatever choice they make – it just didn’t seem like a big detail to us.

“Personally, I think it shows a progressive world view that we didn’t think a transgender character was a big deal. It was just a character to us, part of the world, helping to drive the story along.”

Oster did elaborate, however, how the restrictions put on the writers are perhaps what made people feel the character’s dialogue felt rushed.

“[The revelation that she is transgender] is what we consider three dialogue nodes deep,” Oster explained. “We put an arbitrary limit on our writers for our support characters of just three nodes deep, just to control word count. Siege of Dragonspear is over 500,000 words of dialogue, so we had to put limits on writers so they didn’t create more.

“The character goes from ‘Hi, how are you doing?’ to ‘I’m transgender’ in three conversation lines. That’s a really shallow way of telling me a life-shattering event. The transgender people I know are not going to blurt that out as quickly as that – it’s going to take a while, you’re going to have to get to know them.”

Because the character has captured so much attention, Beamdog are planning to expand her role, which is what everyone wanted anyway, right?

Read the full interview over at Develop.