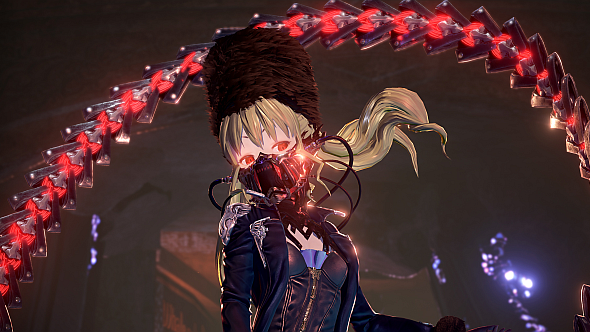 As promised a week ago (see original stories, below), Bandai Namco has made its official Western announcement of Code Vein. The news squares with what was revealed to Famitsu the other day (also below), but there are a few new details, and some new screens.

What else is on the horizon? Check out our list of exciting upcoming PC games.

For one, Bandai Namco say the game will release “on major home consoles in 2018” – we’ll just have to hope that includes PC. We’ve also learned a little more about the premise. The publishers say:

“In the not too-distant future, a mysterious disaster has brought collapse to the world as we know it. Towering skyscrapers, once symbols of prosperity, are now lifeless graves of humanity’s past pierced by the Thorns of Judgement. At the centre of the destruction lies a hidden society of Revenants called Vein. This final stronghold is where the remaining few fight to survive, blessed with Gifts of power in exchange for their memories and a thirst for blood. Give into the bloodlust fully and risk becoming one of the Lost, fiendish ghouls devoid of any remaining humanity.” 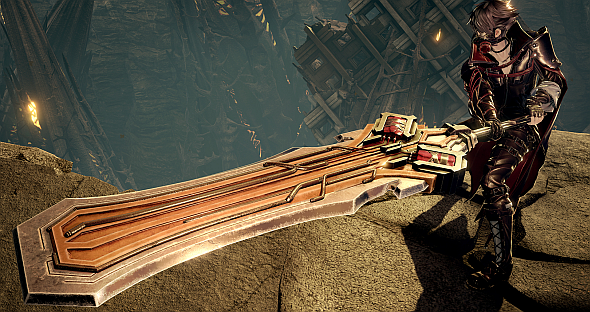 You’re one of those Revenants, as we know, and “after stumbling into Vein” you’ll set out into the world with a companion picked from among Vein’s residents. You’re in search of your lost memories and a way out “of this new, demented reality.” As a Revenant, you have access to Blood Veils, “devices capable of draining the blood of [your] enemies in order to enhance [your] own abilities.” Those enhancements are the aforementioned Gifts, and will enable you to change form to increase your strength, weaken your enemies, and utilise new weapon abilities with high-power attacks. Combining this with a range of weaponry, you can develop a unique playstyle or adapt to changing battle conditions. 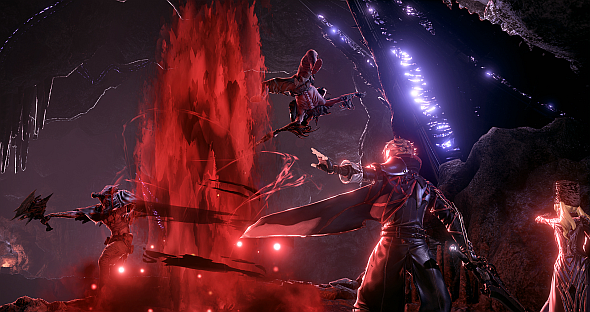 A few new screenshots give us a further taste of the action and the aesthetic. It looks nothing like the very stylish teaser trailer (still embedded above), but more like a blood-soaked anime with added spikes. 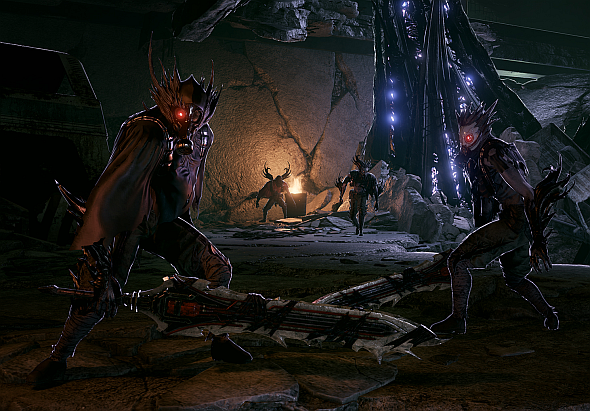 Code Vein is described as a “challenging action-RPG” replete with “vicious enemies and monstrous bosses to put players’ combat skills to the test.” Seems like comparisons with Dark Souls are not unwarranted; it’s clear that Bandai Namco want something to fill the hardcore ARPG void while FromSoftware work on whatever’s next.

Bandai Namco’s next project, teased last week in a stylish trailer, will be a Dark Souls-esque action RPG named Code Vein, and is due in 2018.

That’s according to Japanese gaming siteFamitsu. Google does its customarily serviceable job of translating the story, but a games enthusiast named Black Kite has also been tweeting their own translation.

Apparently, Code Vein is set in a ruined near-future. You are a Revenant, a vampire-like creature that gains powers “in exchange for most of their memory.” Running low on blood will cause you to turn into a ‘Lost’, which is something like a ghost or devil, presumably depending on the translation. This sounds like it could be comparable to Dark Souls’s human/hollowed states. You can play co-operatively with ‘buddies’ to explore dungeons and pursue your overarching mission to discover and survive “the truth of the world”. You’ll mainly use close-ranged weapons, including one- and two-handed swords, spears, and hammers, though the teaser trailer features a character with a bayonet on a rifle.

There will be new additions to the Souls formula, such as a piece of equipment called Blood Veil, which draws power from sucking Lost blood. “Normally it acts as clothing/armour but will change form when used”, and there’s an ability called Tempered Blood that “gives enhancements/new actions” after successfully sucking blood with Blood Veil. Its effects will differ “depending on the Lost fought“, and can vary between strengthening yourself, debilitating your enemies, or direct attacks.

Code Vein will be made in Unreal 4 by the Bandai Namco team who brought you God Eater, a game series for Sony handhelds (with occasional PC ports) based on an anime series of the same name. Development of Code Vein is said to be about 35% complete, and platforms are as yet unconfirmed.

Look forward to the official reveal on April 20 (see original story, below), when we’ll likely get a full trailer.

Original story April 13, 2017:A beautifully stylised if macabre new video on the Bandai Namco YouTube channel teases a new project by the Japanese developer-publishers, which will be fully revealed next week.

You can watch the video above or check Bandai Namco’s announcement at their website, though it doesn’t add much – only that the new title is due to be announced on April 20, and is “in development by Bandai Namco Entertainment”.

Until then: with the hashtag “PrepareToDine” and the fanged protagonist licking blood from her lips in the opening shot, perhaps eating your enemies will be a key mechanic? You never know. The presence of gas masks, modern playing cards and urban dumpsters suggests a modern setting.

And how about that art style eh? According to the YouTube description, it’s “original animation” by Lizzi Akana – whose work you can see more of on her website– “inspired by an upcoming Bandai Namco Entertainment project”, which may not necessarily be related to the teaser. So as amazing as it looks, we can’t be certain the game itself will follow this art style.

To the elephant in the room: there’s plenty here that are hallmarks of Dark Souls developers FromSoftware, such as the ruined church, the bonfire, the creepy shapeshifting and the giant boss-like monster at the end. Bandai Namco are obviously reinforcing those comparisons with the hashtag, which is a reference to the tagline of the Dark Souls games. And with Dark Souls III having just received its last piece of DLC, From have nothing else on their plate.

And yet, that could all be wishful thinking. There’s no mention of From in any of this, nor any sign of their branding. We’ll have to wait until next week to learn more.