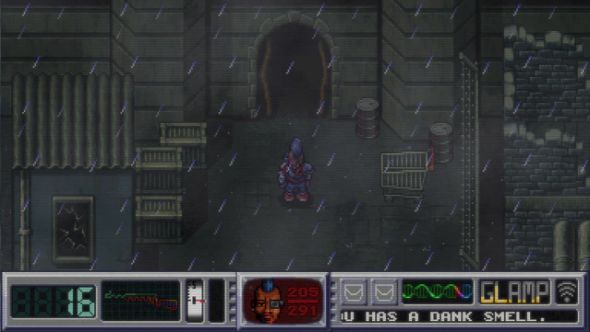 The sequel to the wonderfully bonkers 2008 JRPG Barkley, Shut Up and Jam: Gaiden has not, in fact, disappeared into the vapour. An update has been posted to the game’s Kickstarter page, which assures us that “the game is still being worked on despite every evidence pointing to the contrary.”

For more bizarre indie imaginings, check out our list of the best indie games on PC.

Specifically, returning devs Tales of Game’s say they’re cleaning up NPCs and quests, “making sure every permutation is taken into consideration, fixing inconsistencies in the dialogue and overall making sure they are all as they should be. It is a slow, tedious churn but it will be done.”

This is really just an update to let us know they’re not dead, so there’s no more news, but a few new videos to show development so far. If nothing else, please justwatch the video captioned ‘Bootypocalypse is “thundering down”’, which contains some of the sparkliest, silliest dialogue you’re likely to see today (but no actual booty, so don’t worry if you’re at work).

The original Barkley, Shut Up and Jam: Gaiden was described (by the devs) as an unofficial sequel to Space Jam (yes, the movie), and Barkley Shut Up and Jam, a completely unrelated basketball game for the Sega Genesis and SNES consoles featuring former NBA MVP Charles Barkley.

By contrast to that relatively serious sports sim, the veryunofficial sequel is an indie JRPG set in 2041, in “post-cyberpocalyptic Neo New York”, following a tragic incident in which Charles Barkley dunked so hard at a game that he killed most of the crowd. You can download and play it for free here.

In the sequel, you’ll play a powerful youngster who “awakens from a basketball-induced coma aboard the mysterious dwarf space ziggurat Necron 7”. Honestly, there’s loads of this stuff.

More details can be found at the game’s fully-fundedKickstarter, where it launched in 2012 targeting an early 2014 release date, so frankly we’re glad to hear anything from Tales of Game’s. There’s no update on a release window, so let’s just hope it doesn’t actually release when the announce trailer joked it would, in 2023.