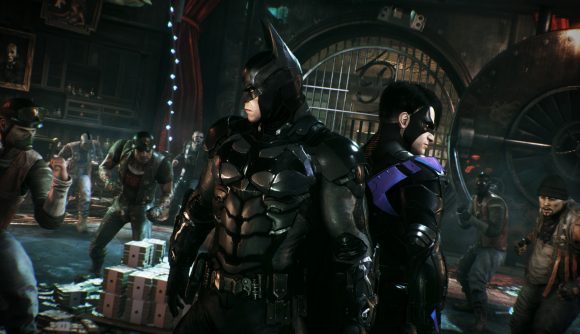 AT&T, the parent company of WarnerMedia, is looking to sell off Warner Bros. Interactive Entertainment. According to CNET, the conglomerate is fielding offers, with the final selling price potentially landing at $4 billion.

CNET report that three major games publishers, Take-Two Interactive Software, EA, and Activision-Blizzard, are interested, but nothing is close to being finalised. AT&T had shelled out $109 billion for Time Warner in 2018, in what was a landmark deal comparable to Disney’s acquisition of 20th Century Fox in 2019.

Founded in 2004, Warner Bros. Interactive Entertainment currently owns Rocksteady Games, NetherRealm Studios, TT Games, Monolith Games, and Avalanche Software, alongside a number of WB-branded studios. Most of the major IP is licensed, such as LEGO, Harry Potter, Lord of the Rings, and DC comics. Some of these teams have defined themselves on these licenses, like the Batman Arkham series from Rocksteady, TT Games and the multitude of LEGO titles, or Monolith and the Middle-Earth games. There’s many strong franchises within the pool of IP, and a lot of great developers who make them, making a changeover a tectonic idea should it come to pass.

These things are far from simple, however, and one of the major hurdles here is that many of the licensing deals will need to be renegotiated under the new parent. Time Warner as a whole owns DC Entertainment, but it only has certain rights to Harry Potter and Lord of the Rings, and that’s before getting into the cross-section of properties LEGO uses and draws from. Whomever signs the check is in for some lengthy discussions.

There were murmurs that new Batman and Harry Potter games were coming this E3, but no sign yet, and WB Montreal has told everyone to be patient. We do have coverage of what was announced during this year’s not-E3, from the PC Gaming Show and the Future Games Show, so there’s plenty to get excited about all the same.