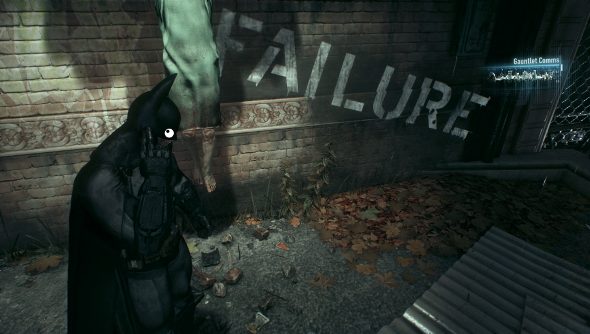 Four months after it first launched and was subsequently removed from sale for being an abominable mess, Batman: Arkham Knight has finally reappeared on Steam. It’s ready, finished, good to go. Or at least that’s what Warner Bros. say.

With all of this extra time, feedback and criticism, Arkham Knight should be a pretty solid PC port. The hard drive, SLI and performance problems should be a thing of the past, along with the countless other issues that have haunted the game since June. But they aren’t. 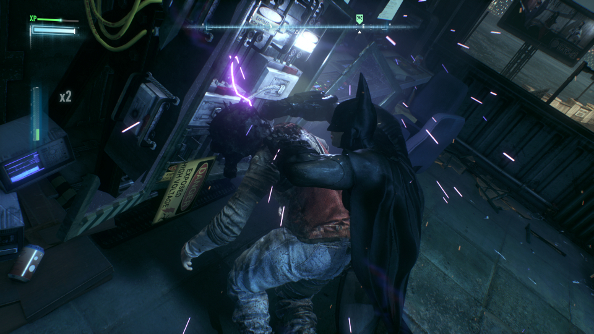 The game is playable, at least for me – there are plenty of folk suffering from constant crashes and other game-breaking issues – but it was already playable after the interim patch. I assumed, like a crazy person, that the time between then and now would be spent making it more than just playable. I can hardly tell the difference.

The list of customisable graphics options has notably improved since launch, with additions that came about in the previous interim patch. It might not appease obsessive tweakers, however, and there are still unfortunate omissions like the ability to do more than turn antialiasing on or off. 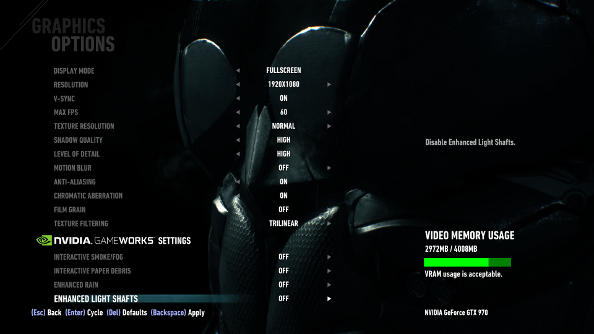 Presets are absent, nor will the game scan for optimal settings, so it’ll either be down to you to test the settings or you can use GeForce Experience, if that’s available to you. The latter option is not particularly effective, though. GeForce experience rarely chooses settings that will allow for a smooth framerate of 60. And even if that was not the case, in Arkham Knight, this seems like an unattainable goal. 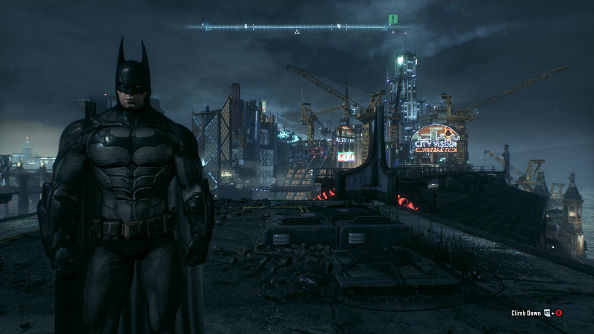 Gameworks gobbles up VRAM and causes the worst of the performance issues in Arkham Knight, and while I’m usually able to use these features in other games, in this case they seem to be exclusively for players with top of the line GPUs like the GTX 980Ti.

The game looks great without these extra bells and whistles, however. But with or without them turned on, Arkham Knight on the highest settings is very inconsistent. At ground level, 60 FPS is attainable, but while gliding above the city or driving around in the Batmobile, it varies wildly, sometimes plummeting to 30.

Indoors and away from the big open world, performance improves. Indeed, it rarely dips below the high 50s. The moment I hit Gotham again, however, the troubles return. 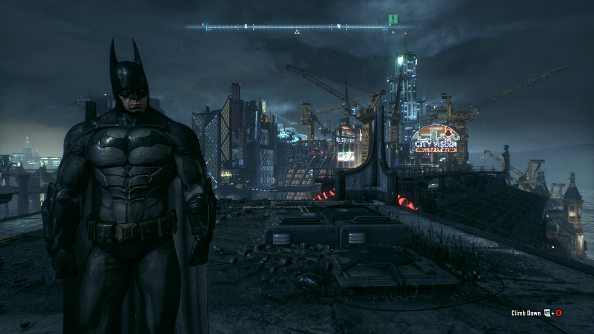 Turning everything down to ‘normal’ and reducing anisotropic filtering actually doesn’t have a big impact. It’s hard to tell the difference, visually, and performance is mostly the same. The frame rate stays at 60 more often, and it only dips to 40 rather than 30, but it’s still inconsistent. That’s the real problem – not the number itself, 40 isn’t terrible, but how often it fluctuates.

Again, the Batmobile continues to be the source of the poorest performance, while gliding at high speeds can cause frequent dips as well. I suspect that this is the texture streaming issue rearing its head once again, as it has since launch. 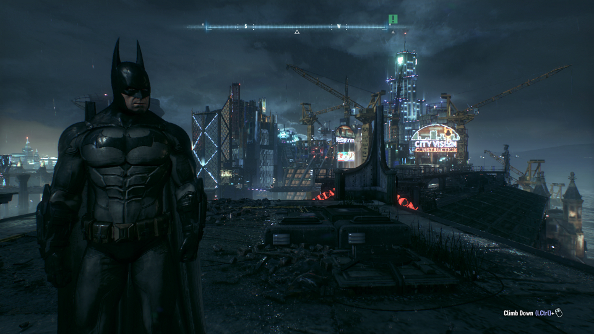 With everything turned down to low or off, Arkham Knight is still not stable outdoors. Performance is obviously improved over the higher settings, but continues to dip during busy scenes, while driving in the Batmobile and occasionally while flying about.

The performance problems in the open world are made even more noticeable by their absence indoors or outside the most built-up parts of Gotham. With every setting, I have no problem hitting a generally stable 50-60FPS, as long as I’m not flitting about in the open world. Unfortunately, the open world makes up a large part of the game.

It seems pretty clear that, since the interim patch, no major work has been done to improve performance. 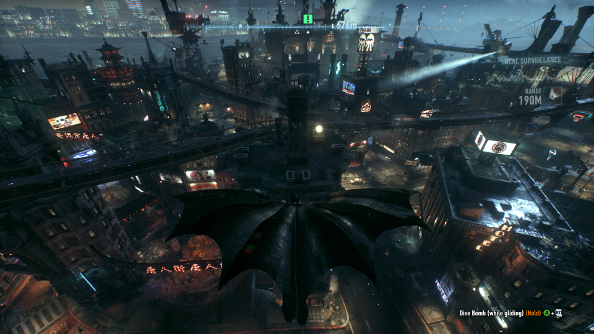 All that said, Arkham Knight is as fluid (performance issues aside) as you’d hope from a Rocksteady game. Batman is a master at traversing the city, whether he’s running, sneaking or gliding like a great big predatory monster. Combat is a delight again, as well, and Rocksteady has nailed Batman’s brutal but surprisingly graceful brawling style. Scraps are rhythmic and hypnotic, part dance and part savage struggle, and it makes it hard to get from A to B, because I keep stopping to get in more fun battles.

That’s why I’ve got a scowl plastered on my face. I really like Arkham Knight. Yes, Riddler’s puzzles have become terrible chores, and those blasted Batmobile sections are dreary, out of place wastes of time, but the rest of the time it’s just a great Batman game. It doesn’t elevate the series, and Arkham Asylum is still the best of the lost (sorry, City lovers), but it’s fat with gadgets, solid progression, engaging action and some cracking voice acting. It deserves a better port than this.

Several bugs, GPU and OS-specific problems that have been around at launch have also not been solved. These issues were mentioned when the interim patch went live, with Warner Bros. assuring that they were still being worked on, but obviously they weren’t fixed in time for the relaunch. The temporary solutions that have been offered would be hilarious if people hadn’t spent money on this thing. 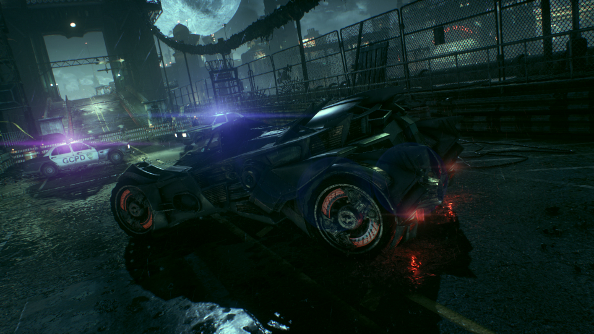 Here’s one for anyone having memory leaks on Windows 7: “If you encounter this, simply re-launching the game will resolve the issue.” Ah yes, the old ‘turn it off and on again’ fix.

If you’re a Windows 10 user and gameplay isn’t smooth, Warner Bros. offers a very simple solution: “[W]e’ve found that having at least 12GB of system RAM on a PC allows the game to operate without paging and provides a smoother gameplay experience.”

Please don’t buy more RAM in hopes of solving these problems. It isn’t guaranteed to help.

At this point, it seems like Arkham Knight is beyond hope. Perhaps the situation with the game is so bad that this really is the best that it can possibly be, and that’s really not good enough for a triple-A game that’s been getting fixed for four months. The state that it is in now is a significant improvement over the mess it was in June, but it remains a poor PC port marred by performance issues and bugs.