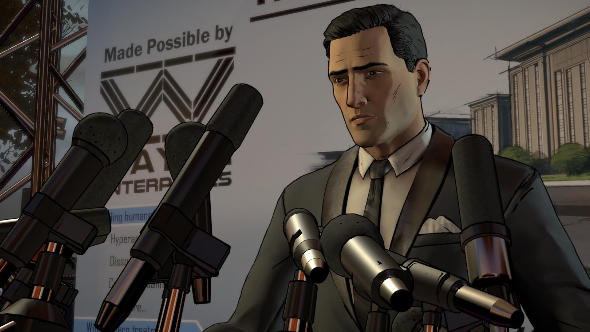 As we all know, Batman’s pretty good with a punch. We saw him revolutionise third-person melee combat in the Arkham series, and now he’s here to tweak Telltale action sequences. As you may expect, his impact here isn’t exactly genre-defining, but it’s just enough to make this interactive comic book’s fight sequences feel authentically Caped Crusader.

Looking for the next big thing? Try our list of the biggest upcoming games in 2016.

Using a Waynetech drone, you can spy on a party sequence that Batman intends to attack during a later scene in this first episode. The system highlights armed mobsters throughout; one on the balcony, then several more at key areas inside. Clicking on each highlights two attack angles. Will you take this guy from above? How about this chap: smash him through the coffee table, or hurl him at the wall? Each choice plots Batman’s violent rampage in blue holograms, awaiting the all-clear from you before he swoops into action.

In truth, this planning stage is more an illusion of choice than it is a strategic moment. As the Dark Knight’s boot kicks the teeth out of the first goon, it’s clear that what’s about to go down is a typical Telltale action sequence, albeit being able to pre-decide the components that go into it. You can’t mess up the planning stage; there’s no ‘best’ order of combat to be discovered.

That’s kind of a shame. In Telltale’s new episodic series, Bruce Wayne is still clearly new to all this crime-fighting malarkey. He’s yet to forge a relationship with Gotham’s police department, trusty butler Alfred still questions if he’s doing the right thing, and pretty much none of his rogues gallery have emerged from the cracks yet. Despite this, Bruce is an astonishingly confident Batman. In combat he never puts a foot wrong, dodging bullets and blows as if he’d been wearing the cowl for a decade.

Pretty much all media outside of the DC comics tends to depict Batman in his earliest years, and that’s understandable. Telltale have clearly done this in order to spin their own reinvention of the universe (when you meet their interpretation of the Penguin you’ll soon see what I mean). But there are certain things you need to explore when dealing with a younger, greener Batman, and his mistakes are one of them. If they’d opted for a combat system that allows significant slip-ups, Telltale would not only have fulfilled that narrative need, but also offered a set of mechanics with far more consequence.

Such a complaint doesn’t rob the fight sequences of their charm, though. As a long-term reader of the Dark Knight’s adventures, I can’t help but smile at the way Telltale have captured his moves and combat approach. Despite the engine still suffering from moments of juddery animation and missing audio files, the fights look as if they were torn from the pages of Detective Comics. 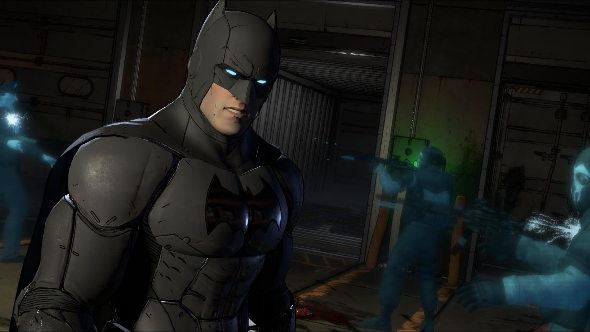 Talking of detectives, your time in the costume is split between two very distinct phases: fighting goons, and doing investigative work. Telltale promised that detective sequences would be similar to those seen in the Arkham series’ crime scene recreation scenes, and they weren’t kidding. They’re even drawn in the same holographic format. The meat of these puzzles draws more from the latest Sherlock Holmes games though; the clues you find must be linked together to come to conclusions.

But, just like in the combat planning sections, there’s just a bit too much hand-holding. All clues that can be found are vital, so there’s nothing to muddy up the situation. You can’t make incorrect assumptions, so the right conclusion is far too easy to arrive at and feels undeserved. A few more pages torn from those Sherlock games would have drastically improved detective mode.

Being dressed as a flying rodent only encompasses half of Telltale’s approach though, and the other side of their story is what sets it apart from other Batman games. Being a developer that’s dedicated to conversation and story, Telltale are able to explore what it’s like to be Bruce Wayne to an extent that other games haven’t attempted. The bulk of episode one sees you in a tuxedo more often than kevlar, and it’s in this civilian guise that you’ll make most of your ‘big’ decisions. While there’s yet to be anything genuinely tough, much of Bruce’s choices revolve around how far he wants to pull his family’s name through the dirt, and who he trusts with delicate information; decisions that will no doubt show their true impact in subsequent episodes. 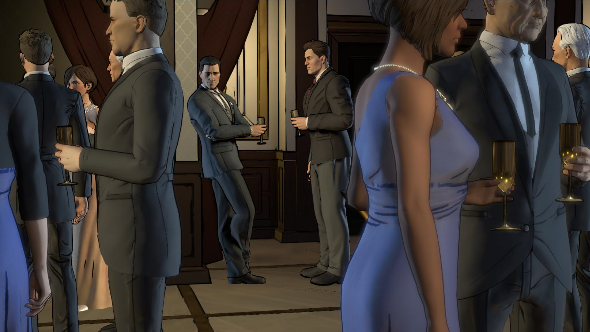 There’s certainly some fun to be had as Bruce. The interesting thing about his character is that, depending on who’s writing the comics at the time, Wayne is either genuinely a playboy, or just pretending to be in order to maintain a cover story for his true personality. With Telltale’s dialogue choices, you get to make those calls. Will Bruce flirt with women at his big party, or be reserved and dark? Will he be a gracious host, or make dickish jokes about his audience?

How well this will pan out over subsequent episodes remains to be seen. Not every superhero has a worthwhile alter-ego. Daredevil is equally, if not more, interesting out of costume because he’s a lawyer attempting to fight crime from the courtroom. Will Bruce Wayne’s ‘job’ as filthy rich socialite be gripping enough to float 50 percent of a series? Hopefully so: this first episode lays some promising groundwork, and allows characters like Vicki Vale, Carmine Falcone, and a pre-disfigurement Harvey Dent to shine in roles they couldn’t in a typical action game.

In typical Telltale fashion, the first episode concludes with huge questions, and it’s certainly an interesting path they’re about to take Batman down. Early in the episode, a woman tells Bruce “Old families like ours should flock together like birds”, which suggests that we could be about to see one of the best villains of recent DC history make their first game appearance in the form of a certain Court. If my hunch proves true, it’s the perfect villain to pose a huge threat to both Batman and Bruce Wayne.

And if not, then I eagerly await to see what’s planned for our beloved Dark Knight. Because even if they haven’t quite revolutionised their well-worn formula with Batman, those guys sure do know how to tell a tale.