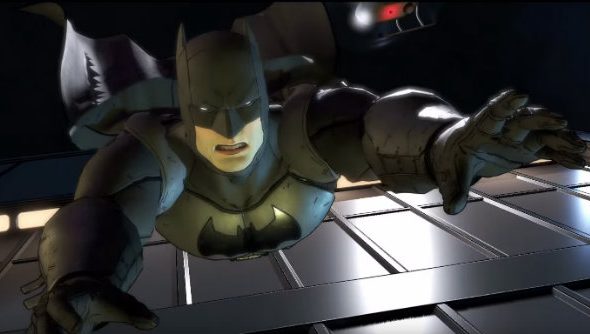 Update August 1, 2016: The multiplayer component of Telltale’s Batman game will actually only support four to twelve people and won’t work with Twitch.

A significant step down today in Telltale’s multiplayer ambitions as they reveal that Crowd Play, their multiplayer mode launching with Batman, doesn’t work with Twitch and is designed for local play only. It is essentially family ‘n’ friends mode, where you can get the fruit juice/beers out and decide who lives and who dies all in the comfort of your own home.

Be like Batman and Robin – wear tights and play our list of best co-op games with a friend.

This was all clarified in a new blog postreleased by the company last week, ahead of release tomorrow. Small aside: it’s coming out tomorrow, August 2. It’s August. The games coming out this month are amazing. Right, that said, here’s what Telltale have to say about multiplayer:

Well, fair enough really. Telltale are planning on running events where they can actually host hundreds/thousands of people using cinema screens, but unless you’re especially wealthy that’s probably not an option. The odd part is that they say it just won’t work with Twitch.

“Crowd Play is not a feature intended for use over streaming services. There is latency introduced by services such as Twitch. This means that everyone isn’t seeing that game at the exact same time, which means that everyone doesn’t see the choices at the same time. So, the group can’t make a choice together at the same time. We are working closely with all the streaming services to address this problem, but it certainly won’t be ideal for streaming out of the box. For now, everyone needs to be in the same room, watching the same screen.”

There are possible fixes for this – pausing, introducing latency to the decisions, making it so it works for the 90% of people who are only delayed by a few seconds rather than ensuring everyone can do it. If SaltyBet can run an entire fighting game ring (of fake salt money) off a shoestring budget, Telltale can probably do similar. It might mean each decision needs a minute or two to be decided, but it would inevitably be massively popular and, at least in theory, increase sales through buffed exposure.

Chances are folks will try to get it working anyway, jury rigging it through Twitch chat and straw polls or using the app with some tactical pausing. We’ll find out when the game launches tomorrow.

The idea comes from when people crowd around the screen and give their input as to what decision the player should make in these story-driven games. Telltale want to build on that collaboration.

Head of creative communications at Telltale,Job Stauffer, told ShackNews,”We wanted a better way to integrate that audience. Now, from two to 2,000-plus people can help the player make decisions. We are now turning all of Telltale’s games into a live interactive multiplayer experience.”

This new feature is calledCrowd Play, and turning it on at the start of a new game will generate a unique URL that allows people to log in on their smartphones. You can set this up so the main player can override the crowd, or you can make it so whatever the group decides happens.

You will see percentages for everyone’s decisions on-screen, and your friends can even send thumbs-up and thumbs-down emojis over to let you know how they feel about your decision making. The latter would work well for streamers, as latency issues are still a problem in implementing full Crowd Play via the internet.

I could see this feature working for events and maybe online, but I like to play these games my own way. Who knows, though, maybe it could be good for little gatherings of like-minded friends. It’s also a good way for parents to play with their children, which makes Batman an excellent first choice. Maybe don’t do that with The Walking Dead.