Last September saw the launch of a Kickstarter campaign looking to fund Battle Chasers: Nightwar, a JRPG from Western developers Airship Syndicate. At the head of this small studio is Joe Madureira, and he’s very excited that backers funded Nightwar and smashed through 17 of the Kickstarter’s stretch goals.

Like an epic adventure? You’ll love these amazing PC RPGs.

Joe Madureira is a familiar face in the world of comic books. Having worked on Uncanny X-Men during the series’ incredibly popular 90s era, his Japanese-influenced style is immediately recognisable. Gamers may not know his name, but they’ll certainly know his style. Madureira was a founding member of Darksiders developer Vigil Games. The bold colour work, manga-like lines, and obsessive amounts of detail on the Horsemen of the Apocalypse are Madueira’s calling cards.

With Vigil now sadly defunct (a victim of the THQ collapse), Madureira is now captain of Airship Syndicate, a small studio he created with fellow ex-Vigil member Ryan Stefanelli. It’s here that his comic book roots finally catch back up with him.

Battle Chasers was, once upon a time, a comic series that Madureira created, wrote, and drew. It lasted just nine issues and ended on a monumental cliffhanger. But fans will finally be reunited with its heroes Garrison, Calibretto, and Red Monika in Nightwar next year.

“People who don’t know about the game still say to me ‘I wish you’d bring back Battle Chasers’,” laughs Madureira. “I’m like ‘Dude, go to battlechasers.com, check it out, it’s coming back!’ and they’re like ‘Whaaat?!’ It’s always fun getting that reaction.”

Nightwar isn’t just for fans, though. Instead of continuing the story (that task has been left to the comics, which are also making a return) this is a new adventure for the characters. “We wanted to be careful to make it accessible to people who’d never read the comics. Gamers should just look at it like a cool RPG,” explains Madureira. 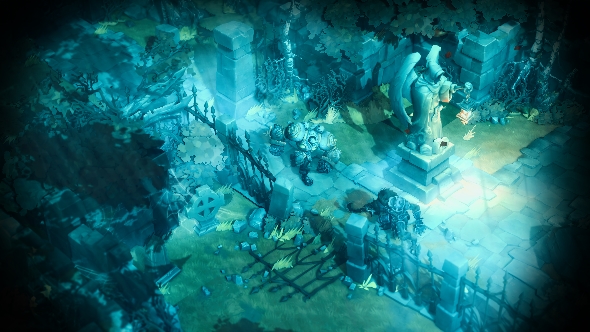 Nightwar is a RPG with plenty of Japanese leanings. It’s a format that makes sense for Madureira, whose enthusiasm for imported games was a source of humour among his editors. “Whenever one of my books would be late, there would always be jokes that ‘Oh, Joe’s playing Final Fantasy’ or whatever,” he recounts.

JRPGs were a huge influence on the Battle Chasers comics. “I was influenced so much by videogame art,” says Madureira. “Whether it’s JRPGs or big blocky Capcom characters from the Street Fighter series.” As such, seeing the characters come alive in that genre makes perfect sense.

It was also the obvious choice for the comic’s ensemble cast. “For a party-based game we just felt it was the best way to present the combat and have multiple characters,” Madureira explains. “You really get to see their abilities, and each character gets their limelight.”

The influences have come full circle. Now, instead of a comic full of JRPG flavour, it’s a JRPG with graphic novel seasoning. For example, panels featuring Madureira’s art display during certain combat moves, making the battle system feel like a hybrid of comic action sequences and videogames.

Madureira feels passionate about making a Western JRPG. “Why aren’t people in the states making these games?” he asks. “There’s a lot of love for these old games but there aren’t many studios that are willing to do it, so we kind of took it upon ourselves to do something.” 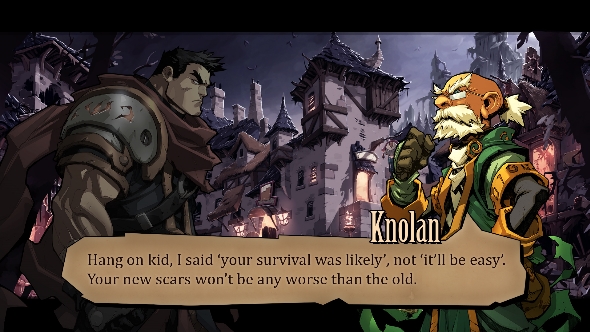 Changing the Battle Chasers universe from a linear comic narrative to an interactive adventure game has been quite the challenge for Airship Syndicate. “It’s more open-ended. We want people to replay dungeons and try different things, and that breaks the linear narrative of a comic book,” Madureira explains.

“It’s hard finding the balance,” he says. “Darksiders was definitely a little more linear. It had cinematic moments that were presented in a linear fashion and it was a little easier to tell a robust story there. But with Battle Chasers we’re keeping it a little more high level.”

Battle Chasers fans will discover that the narrative unfolds in a way they’re not used to. Now they’ll be finding out about the ‘arcanepunk’ world through the environment and collected items rather than just conversation. It’s been an opportunity for Madureira to build his world beyond what’s capable in comic panels, which place emphasis on lean, direct storytelling.

“We are fleshing things out a lot more than we did in the comic series to this point,” he says. “It’s actually making me think differently about the comic going back to it. There’s certain things I want to go back to that I never even touched on. Politically, who controls what? What city belongs to who?”

The hardships of Kickstarter 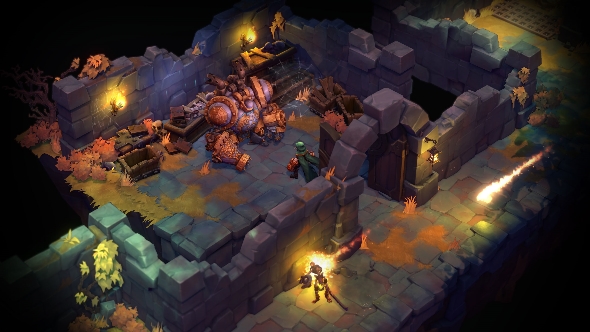 Back when Battle Chasers: Nightwar was just a design document, getting publishers interested was tough. Crowdfunding provided Airship Syndicate with the money to produce the prototype needed to prove that they had a great idea.

THQ Nordic (current owners of the Darksiders IP) are now on publishing duties, but Airship Syndicate are convinced they wouldn’t have been able to secure such a deal without Kickstarter. “Honestly we couldn’t have got to this point without it,” Madureira confesses. “No exaggeration there. It made the game happen.”

Developers typically sing enthusiastic praise for Kickstarter, but Madureira is very open about the difficulties it presents, too. “There’s a lot of work that goes into it, so it probably hurt us for the couple of months that we were doing it,” he reveals. “It really consumes every moment of your day. We definitely ground to a halt there in development. We were pretty much just focused on the Kickstarter for two months.”

The studio is also incredibly aware of the pressure that comes with Kickstarter, especially for a new developer. “We want Airship to be around for a long time,” says Madureira. “We want to make more games, and really any future success is going to come from this first game that we deliver. We know we have to answer to [backers] and we have to give them the game that we promised. So yeah, there’s a lot of pressure.”

Despite the pressure and the hardships of Kickstarter though, Madureira has the enthusiasm of kid watching real superheroes in action. For him it’s a dream come reality: his own creations, once just the heroes of a niche comic, are now the protagonists of a videogame.

“Just seeing the characters move around and do their attacks… y’know, they were just drawings in a comic book before,” he beams. “Actually seeing them tear a boulder out of the ground and throw it into a monster’s face… I never get tired of it.”

Battle Chasers: Nightwar will release in 2017.