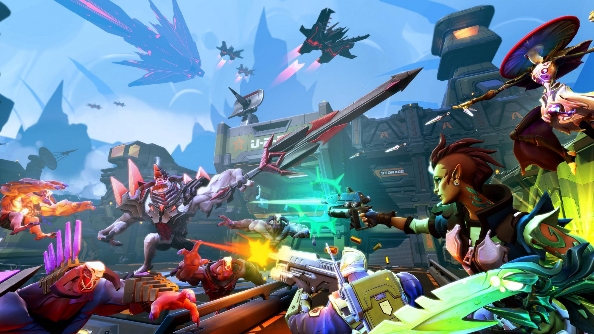 Gearbox are putting a great big “it’s definitely a MOBA” stamp on Battleborn tomorrow, as they introduce a bounty of microtransactions for the game. Players will be able to buy skins and for the 26 heroes in the game as well as taunts for Benedict, Ghalt, Whiskey Foxtrot, Oscar Mike, Shayne & Aurox, El Dragon, Kleese, and Alani – more may be added later.

Skins and taunts for battleborn can currently be earned through gameplay and are only cosmetic items, adding no gameplay benefits to players. The expansion of Battleborn’s in-game marketplace will add a paywall between premium items and those that are earned through play rather than the new in-game currency, Platinum.

Here’s how much Platinum will cost:

With skins due to cost 420 platinum and taunts marking the lowest price point at 230 Platinum, or $1.99.

Gearbox were keen to hammer in two points throughout the announcement blog post: that these extras won’t affect gameplay in any way, and that Battleborn is badass (they made this clear by using the word as many times as possible, which is three times).