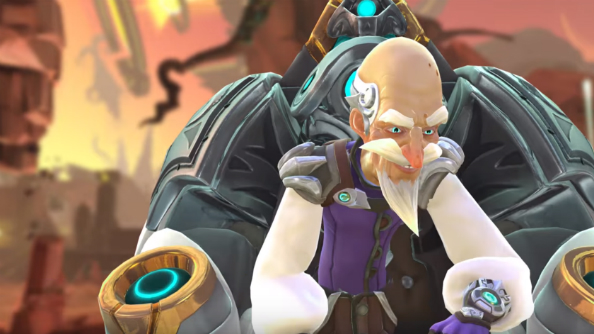 Boy, does Gearbox love dragging out character reveals for their upcoming MOBA. By my count, the Texan studio have now announced precisely 176,000 figters for Battleborn, even if the official roster is only a ‘mere’ 25. Now the final two combatants have snuck out in the form of a preposterously muscled Mexican wrestler and a badass, geriatric scientist.

Battleborn’s style of first-person combat certainly looks intriguing. Will it match up to the best FPS games on PC?

The aforementioned wrassler is called El Dragón, while the OAP man of science is named Kleese. Honouring Battleborn’s gloriously silly premise, the two fighters enjoy quite the eclectic set of moves, as a couple of freshly released trailers reveal.

El Dragón, who was was once known as Francesco Drake, now owns a pair of Terminator-esque arms, after his real ones were ripped off in his last ever squared circle bout. Still, sporting robo arms only further boosts the following abilities:

As for Kleese, the creaky lover of all things scientific not only gets a robotic wheelchair of doom, he’s also treated to this little list of gadgets and moves:

Battleborn launches on PC on May 3rd. Prepare yourself for a whole lot of whackiness.