Other than the fact that it’s played in first-person and Gearbox Software is responsible for creating both of them, Battleborn and Borderlands don’t initially look to have much in common. The former is an unreleased arena-based shooter that borrows a huge number of elements from popular MOBAs, whilst the latter is a sprawling open-world RPG with a focus on levelling up and digging for loot.

Have you heard about the upcomingBattleborn open beta?

A smart studio, however, never lets education go to waste. Let’s take narrative, for instance. Told through what Gearbox refers to as ‘episodes’, Battleborn’s plot is delivered in 30-minute chunks that are designed to be replayed time and again. This stands in stark contrast to the longer form of storytelling Borderlands is associated with, but skills learned through the RPG apply to the MOBA, too. 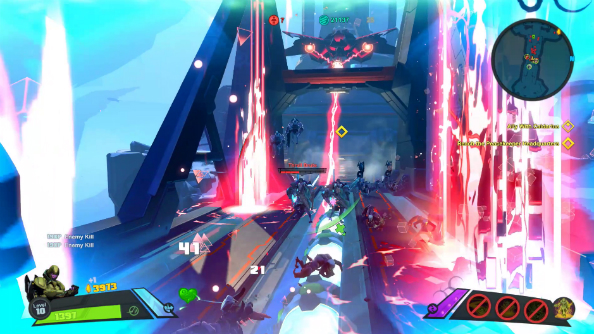 “We have entire chunks of mission dialogue that we can swap out, because this is a game that has been created to be replayed. Replaying in itself creates another challenge where the narrative is concerned as we’re very sensitive to the fact that we don’t want people to keep hearing the same lines over and again when they replay a mission. Adding that variety, whilst still keeping a continuous narrative, is what we’re trying to do.”

Over 120 pages of backstories and lore have been written for Battleborn’s 25 playable characters and the game’s various factions, this tome providing the foundation upon which that variable dialogue (close to 700 lines per character) can be dreamt up and locked down. It’s the setting that those pages depict that is more important to Varnell than a simplistic narrative that, in his own words, goes like this: “there’s one star left, there’s a bad guy trying to destroy it and you’re trying to foil his plans”.

Building a detailed and enticing world, however, allows players to gain satisfaction of a form not centred around shooting a gun. Character dialogue, mission objectives and cut-scenes are one way to inform players of the world around them, but the way entities move through animation is another. Evoking a sense of personality and individuality through animation is another Borderlands lesson employed here.

“In Borderlands 2 you might be looking around and you’ll see someone playing as Zero who is stealthing along and all you can see is this little ghostly silhouette running around,” remembers Varnell. “Then you realise what he’s doing and it falls on you to get in there and support him quick. However, then you realise that Salvador has pulled out his big guns and is shooting everything and things have already turned to chaos. 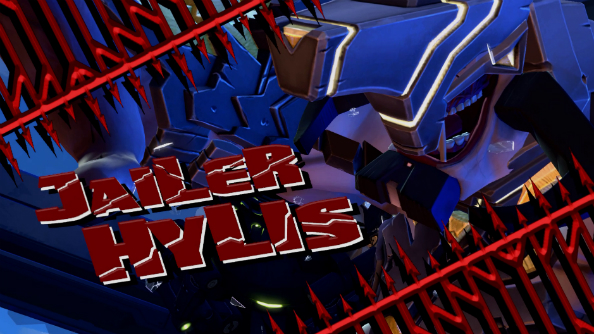 “So, yeah, we put a lot of care into the way our characters are rendered and animated. In Battleborn we haven’t really used any motion capture whatsoever, it’s all key-framed and hand animated in order to bring that character out.”

Not being limited to what is possible to perform in the mocap suit has allowed Gearbox to approach each character’s special abilities in a way that is more outlandish and exaggerated than would otherwise be possible. Being able to absorb a character’s personality is one benefit of this, but another comes in the form of communicating actions clearly and quickly.

Given that all 25 characters have their own sets of attacks and skills it’s necessary for teammates to be able to instantly recognise what a certain move is (and does) upon execution of it. Battleborn moves at a frantic pace and there’s not always time to coordinate attacks in heated situations, meaning you come to rely on swift scans of the battle field in order to decide how you should then act. This is especially true in competitive multiplayer in which skilled players are ready to pounce and punish any degree of indecision or poor choices. 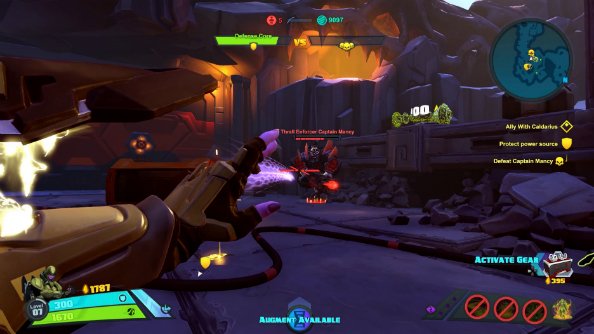 It’s not just how to present the characters that you see that has been informed by Borderlands, though. Equally important is how you envision yourself, as Varnell is keen to discuss:

“There’s a lot of Borderlands in this, at the heart of it. With Borderlands we learned a lot about representing skills in the first-person and also learned how to present rich characters in first-person and not have it feel like you’ve done yourself a disservice by not letting players see the characters themselves. A lot of heavily character-centric games, especially with RPGS, like to let you play in third-person so that you can always see the character.

“This game is an extension of some of those lessons learned with Borderlands. In Borderlands 2 we made a lot of intentional effort to show the characters when you’re in the menus so that you can see what they’re wearing and that sort of thing. We’ve got similar things in Battleborn: when you teleport back to base the camera pulls back to third-person, almost every character has a specific move that is shown in third-person, when you taunt it goes into third-person. So we want you to remember who you’re playing as.” 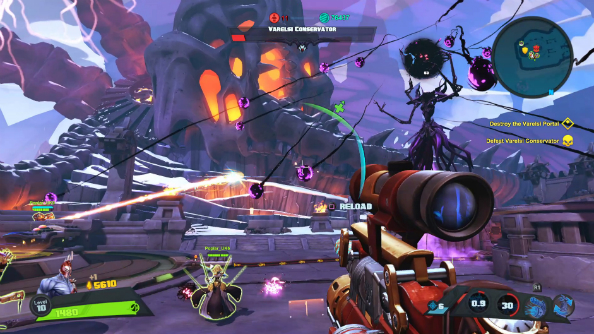 The HUD, too, is used to infer your avatar. One character has two giant horns protruding into the screen from the upper corners, another has her four arms resting on the HUD in front of you. It sounds inconsequential on paper, but the effect is quite startling after you’ve played with other characters that are represented in first-person in a manner you’d ‘usually’ expect.

Indeed, playing as a broad range of characters is important – not only to experience their visual identities but also to get to grips with how they impact the balance of gameplay. Each has a unique attack platter that alters how you should approach combat; a single character swap amongst your co-op group of four, for instance, having a marked effect on everyone involved.

As a result, balancing the action has not been an easy job considering that all 25 characters must work equally well in both co-op and competitive arenas.

“We always balance the competitive side first,” reveals Varnell. “You have to do that because it’s the hardest part to balance and it’s the part that will make people scream and quit if it’s not balanced well. In co-op play we learned through Borderlands that there’s a bit more tolerance for being overpowered or slightly underpowered, especially when you start mixing in gear that helps you to grow and scale up your characters to overcome perceived weaknesses. 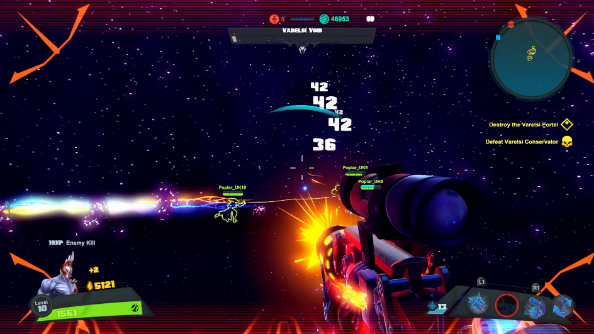 “I think we’ve landed in a place that’s pretty close, though. There are definitely some characters where you think ‘this is ok’ in co-op, but then you take them into competitive and you feel like an indestructible god. It’s something that we’re looking to continually tune, though. If all of our characters are viable to play wherever you want to play them then we’ve really succeeded because we want to put the agency back into the player’s hands.”

Battleborn might be taking many lessons from Borderlands, but the idea is to use that knowledge and apply it in a way that works for an entirely new genre. The goal isn’t to simply recreate Borderlands in a new setting.

“All of these things are extensions of what we learned from Borderlands,” Varnell concludes, “but we’re trying to do a lot of those things in way that the Borderlands universe didn’t really let us do. One of the primary reasons we came to this is that we wanted to try new ideas before we move back to expanding upon the familiar base that we have with Borderlands.”

Excited to get your hands on Battleborn? Let us know in the comments below.