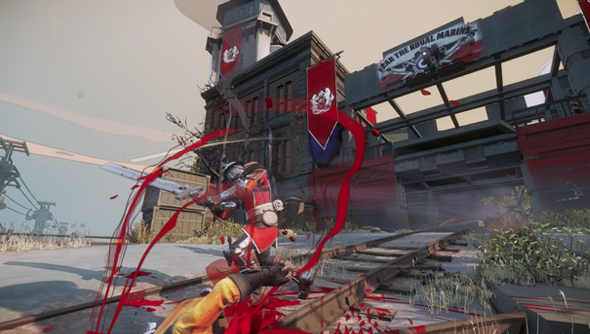 The tropes of the Wild West are so ingrained in us that even when a game like Battlecry comes along – which is set in a fictional Eastern Bloc world, features swords instead of six shooters, and has people dressed in 40s-era clothes – it makes me think of cowboys.

See for yourself in the new trailer.

Battlecry throws you into arenas to pit yourself against other players, much as in Team Fortress 2. I get a distinct vibe of Valve’s team deathmatch shooter from Battlecry. It’s partly the level design, which is all blocky buildings and unified colour schemes, but also the character design, which is far from your standard military fare.

Back in August, Tim spoke to Viktor Antonov, creative director on Battlecry and the designer who brought us City 17 and Dishonored’s Dunwall, about designing new worlds. He revealed that while the characters look like modern-day Cossacks none of their uniforms are copied from something in history. Everything about them rings bells but is slightly wrong under closer inspection.

I wasn’t especially interested in Battlecry before but, seeing it in action it, it looks good for at least a few evenings of fun.