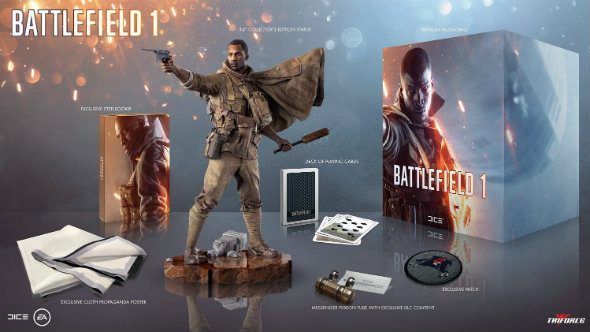 There’s a pricey Battlefield 1 Collector’s Edition going for sale and it doesn’t contain the game. Not even a download code for the game. It’s $130.

WWI is in the past, but our list of upcoming PC games will give you a glimpse of the future.

Despite not coming with the actual game, this collector’s edition doesn’t release until a few days before the first-person shooter does, at which point it will be available to play on EA Access.

As you can see on Amazon, it comes with the following items:

None of those things are a game, and the item listing makes it very clear that there’s no game included.

While it is easy to laugh at such a thing existing, I could see it actually being quite popular with the PC crowd. I mean, most people are going to buy the game on Origin, right? Maybe those people would like all the merch from the collector’s edition, so it kinda makes sense.