Since Battlefield 1’s announcement in May, DICE have been sending developers over the top to make the case for its setting: the birthplace of modern warfare, they say, where cavalry charges were met with unprecedented machinery; a war of surprising variety, fought in both Arabian deserts and Italian mountains. The way the Swedish studio tell it, they’ve finally found the perfect period for Battlefield.

What’s the best FPS around? Is it a Battlefield or a Battleborn? Have a gander at our favourites.

So why, then, did the ten or eleven entries prior visit WWII, ‘Nam, the modern Middle East, downtown LA and a future ice age – practically every other 20th, 21st or 22nd century battlefield you might think of – before turning to the Great War?

Presumably DICE had the same muddy image of the trenches that most of us do: of lost momentum and terrible human cost. Even when Battlefield games still came in boxes with bullet points on the back, stagnation and despair were never on there.

Perhaps mercifully, Battlefield 1 is unrecognisable as the war written about by Siegfried Sassoon, Sebastian Faulks and Ben Elton. Remember Star Wars Battlefront’s Hoth? You’ll have engaged in more trench warfare there than you will in Battlefield 1’s Saint-Quentin.

DICE have drawn a freehand circle around a chunk of St. Quentin Scar, a large Conquest map that takes in a swathe of French countryside. They’ve limited the battlefield to a single cobbled village. Which is a relief, frankly, because in Domination there are no aircraft, troop transports or other large metal objects to hide behind – only fleshy infantry. A garden wall might be the only thing shielding you from a hail of submachine gun fire (only prototypes, but inexplicably common round these parts).

Stripped of the vehicular trappings of the series, Battlefield 1 offers lithe and fleeting foot combat over arbitrary bits of territory. This is perhaps the closest DICE will get to historical veracity in its depiction of the Great War, but it’s still closer to Quake than the barbed wire and bayoneted barbarism of the trenches.

Domination seems designed, as it has since the very first Battlefield, to cut out the downtime of Conquest’s larger-scale battles. What’s left behind is a frenetic, short-range kind of carnage resembling scrappier shooters like CoD.

There’s no spawning on squads or at control points. Instead you’re placed at random and pointed at the nearest chunk of no man’s land – a waterlogged courtyard or beleaguered townhouse. And if you make it there unchallenged, your team’s flag will shoot up that pole with physics-defying velocity. Land changes hands within seconds, not minutes, as each side pushes for 100 points. 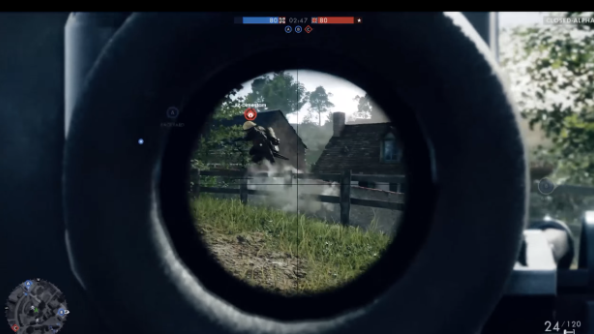 About those teams: the scenario doesn’t encourage or necessitate teamplay, so much as judicious use of cover and mindfulness of the many windows available to would-be snipers. Series diehards will notice that medic duty has been separated out into its own class, however, which suggests potential for coordinated support once everybody’s up to speed with their newly defined roles.

A couple of weeks on from the demo, what sticks most in the memory is the gas – pluming outwards across those cobbles. In life, soldiers simply opened cylinders and let the chlorine gas drift downwind, indiscriminately burning the eyes, skin, and lungs of the enemy. Its use constituted a Hague war crime.

Here, chemical warfare yields gas grenades. The effects linger and cause soldiers to cough and deteriorate, until they press T and pop their gas masks on – losing some of their peripheral vision in the process. A nice mechanical trade-off, but an iffy choice of gadget for a videogame, frankly.

Still: Domination mode is back, and it works much as it did before. If you’re somebody who likes the odd vehicle-less interlude when you’re sick of being peppered by planes, this does the trick.

As a Conquest map, St. Quentin Scar plays much like the Battlefield Conquest maps of old. You’re in one of two teams scrapping for control points spread over a huge chunk of contested geography. Sometimes you’ll spawn into a squad and find success in creeping through ruined homes, vaulting over kitchen tables and squinting to make out targets beyond the repeating floral wallpaper.

Or, after a particularly annoying death, you’ll simply commandeer a truck and drive it really fast in the general direction of a capture point. It’s the familiar balance of kamikaze lone wolfing and opt-in teamplay that Battlefield has always enabled. 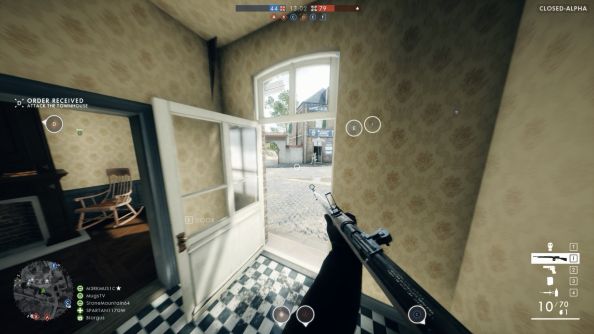 You can see why DICE picked Saint-Quentin, of all the fields in northern France, to present a new picture of the war. The area was the scene of a spearhead attack by British, Australian and American forces that ended in the first real breach of the Hindenburg Line, the German defensive position built nearly two years before. It saw the revelatory use of tanks, and was by World War I standards a lightning-fast victory, lasting days rather than months.

The developers have taken that truth and spun it into something befitting the series’ bombast. Biplanes zip and dip overhead, while tanks trundle down dirt lanes. The light tanks, admittedly, are boxier than those in more contemporary recent Battlefields – chunky and claustrophobic once you climb in. They’re also incredibly vulnerable to the anti-tank grenades available to footsoldiers.

That might be DICE’s biggest nod to the era: there’s a sense that scrambling infantry play a more important role in Battlefield than before. Though the terrain looks exposed and undulating from above, it’s full of potential firing positions and hideaways: the new craters in a pockmarked village or the roof space of a townhouse. 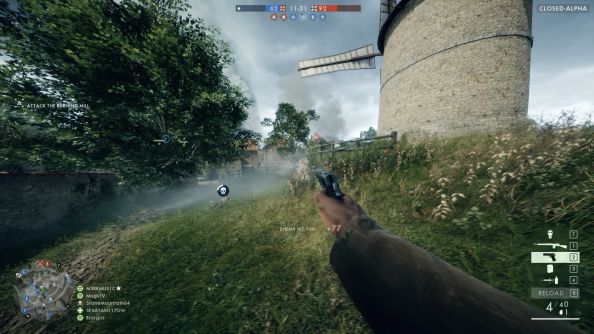 This is some of DICE’s strongest level design, thematically speaking: there’s a sad contrast to the chequered tiles of a proud French hallway and the devastation beyond. That breakdown continues as the battle wears on, too – buildings crumble under artillery fire like stale cake. Battlefield 4 wasn’t shy about its toppling towers, but the developers’ destruction tech actually feels more impressive on a smaller scale like this.

There will be showcase explosions in Battlefield 1, of course – it’s hard to imagine that DICE are fielding zeppelins for any other reason than to crash them spectacularly, as in the game’s early trailers. But there was nothing comparable in scale to Battlefront’s AT-AT on St. Quentin Scar – nor, I’m sorry to report, any horses to ride. In fact what’s remarkable is just how little impact a shift of 100 years seems to have had on Battlefield 4’s formula.

Still: there’s a quaint pleasure to be wrung from the clipped English announcer, who refers to capture points by archaic phonetic alphabet. In no other Battlefield, at least, will your teammates ever scream at you to “get to Butter”.