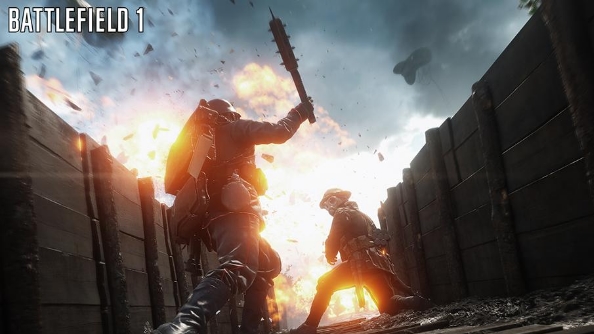 Battlefield 1 is heading back to the muddy murder fields of World War One, and that means an era where there weren’t quite the gazillion different guns that there are in the modern world. There will still be plenty of weapons to choose from in the game though, drawn from a pool of six types.

Stay up to date with everything Battlefield 1: release date, multiplayer, campaign, and setting.

Available to use will be shotguns, SMGs, LMGs, semi-autos, sidearms, and sniper-rifles. Presumably ‘sniper rifles’ mean any kind of bolt-operated weapon, considering most standard infantrymen in WW1 were using non-scoped, manual rifles.

Revealed in a Battlefield 1 Q&A, weapons in those classes will include multiple variations, including the earliest forms of SMGs and automatic weapons.

Battlefield has allowed players to customise guns with add-on attachments in recent installments, but Battlefield 1 aims to make the system less complicated by offering up to three different load-outs for each weapon, rather than changing them on a granular level. Changes between load-outs include different scopes and zoom levels.

Alongside guns, Battlefield 1 will include melee weapons such as the trench mace, and grenades of several varieties. Expect gas grenades to play as large a role as the traditional frag.

Save the date – A new #Battlefield 1 trailer is coming on June 12. Subscribe now: https://t.co/aOafTo3ukLhttps://t.co/KgRCDccYZd

A short trailer shows some of those weapons in action, including a mace and a German LMG. It’s a mere 15 seconds though, but we’ll get a much better look at the game on June 12, when DICE will host a 64-player match at E3 to show off the game’s multiplayer.