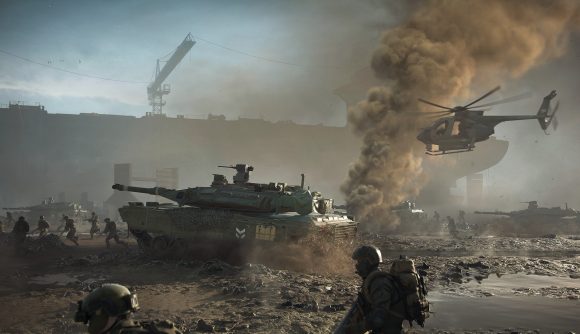 Battlefield 2042 goes into open beta this week – in fact, you can play it right now if you’ve pre-ordered or you’re a member of EA Play. While that’s not technically ‘open’, there are still piles of players hopping in. The beta has already reached over 100k players on Steam, making it one of the top games on the platform.

The Battlefield 2042 beta peaked at 127,114 concurrent players on Steam shortly after launching in the wee hours this morning, as SteamDB shows. That makes it the seventh-biggest game on the platform today, and #71 on the all-time list. And that’s not even counting the players who are jumping in on Origin, Epic, or the consoles.

It’s safe to expect that number to get much larger as the open beta goes, you know, open. You can see full details on the release times here, but the beta opens to the general public on October 8. It’ll conclude for everyone early on October 10, so if you want to play, it’ll need to be soon.

The full Battlefield 2042 release date is set for November 19.