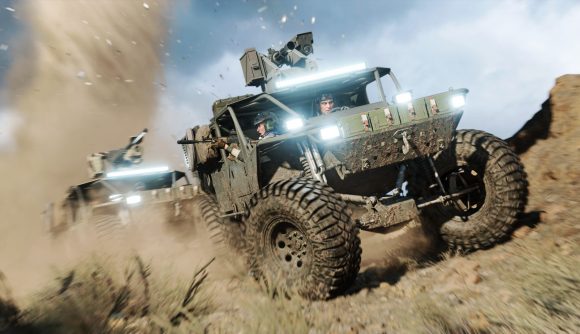 Update 3.3 for Battlefield 2042 has been delayed slightly, as the developers take some time to work in some additional changes to the multiplayer game. The patch, which will include a planned “refresh” to the in-game scoreboard, was originally scheduled to launch sometime in “mid to late February,” but will now arrive in early March.

In the meantime, the developers have rolled out a small hotfix today, February 3, to address some stability issues that have cropped up since update 3.2. Earlier this week, they announced that the first season of Battlefield 2042 has been delayed until the summer, and the beginning of that season will mark the beginning of a full year of seasonal content updates, Dice says.

In January, Dice shared a work-in-progress look at the refreshed scoreboard screen, which will include an at-a-glance view of relevant information like ribbon progression, overall team scores, and individual player performance stats like personal score contribution, kills, assists, and the weight of each stat. The plan is to include the refreshed scoreboard design in update 3.3, which will now arrive sometime in “early March” according to the updated plan.

Our next Update after todays Hotfix will now roll out in early March. This is a change from our last messaging to you all on it's intended release.

The extra time will help to ensure we improve the quality of our Updates, and include additional changes.https://t.co/WoeHvOludK

Battlefield 2042 season one will introduce a battle pass that adds a selection of new items and other content to unlock, and it’ll coincide with the release of new maps for Battlefield Portal.