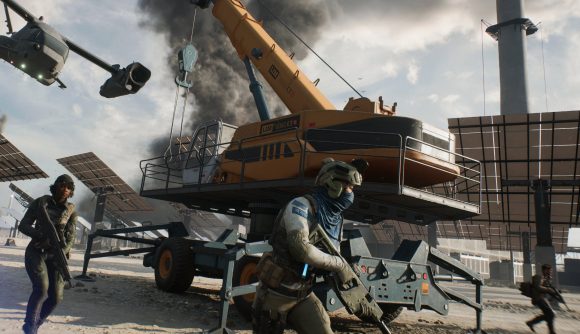 Battlefield 2042 still isn’t in the shape the developers – or players – want it, and so the multiplayer game’s season one release date has been pushed back to the summer. The Battlefield team says it’s planning on incorporating player feedback into fixes and changes to the game prior to the launch of the first battle pass.

The latest update on the official Battlefield site lays out the general direction in which the developers want to focus attention over the next few months, although it’s a bit vague on dates and other specifics. The next update will include a “refreshed” scoreboard to pull up during matches, with player feedback on breaking out friendly teams from enemy teams incorporated into the updated format – but it’s still unclear when that update can be expected to launch.

The post also indicates that “all platform” voice communications are on the way, but does not specify whether that will be part of the next update or one later on down the line. A more detailed player profile screen is in the works too, but again, the post does not specify when that feature will be rolled out.

The rest of the post discusses the creation of a “new feedback loop,” but this isn’t about the reward loops in Battlefield 2042 – this section is about the player-developer feedback loop, and how Dice plans on incorporating player feedback and responding to developing issues in the game.

Effectively, the studio is setting up a sort of ‘public comment’ process for major changes to Battlefield 2042, starting with the developers laying out specific focus areas and seeking comment from the player community. Once that’s been collected, the studio says it will iterate on its plans, and present a version of the strategy that’s been updated to account for players’ priorities.

The Steadfast Exclusive Legendary Bundle, free for all Gold and Ultimate players will include:

The first of these focus areas is map design, and the team says it’ll be kicking off the discussion about this “later this month,” prior to the launch of the next game update.

Dice says the beginning of season one this summer will mark the start date for the year cycle of four battle passes it promised prior to launch. Since players who bought the gold and ultimate editions will be waiting several months longer than they anticipated, Dice is giving them a bonus cosmetics bundle that includes a specialist skin, new weapon and vehicle skins, a ‘rib tickler’ melee weapon, and a new player card. Those bundles will arrive along with the next game update this month.