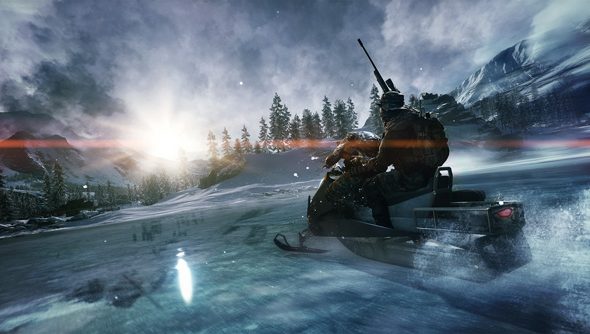 This is how Battlefield 4’s post-release schedule ends: not with a bang, but – okay, there are a couple of bangs in the trailer.

DICE’s Final Stand DLC arrives today for Premium players, and takes us to the really cold bits of Eastern Europe. Gruff Americans have declared a not-so-covert war on Russia, who are arming for the next levolution – sorry, evolution – in warfare. But really, the snowy setting is an excuse to recreate the vibe of Battlefield 2142 in Battlefield 4.

The Russians are experimenting with secret weaponry – which means kinect blast-powered railguns, and the belated appearance of bows in Battlefield 4. In fact, the Russians seem to be inventing weaponry without even trying: you’ll see firing rocket boosters fry soldiers indiscriminately in the trailer.

Final Stand offers three new battlefields, all built around “intense, infantry-focused combat”. But this series has always been about the vehicles, and DICE haven’t forgotten that – a hover tank prototype with eight jet propulsion engines attests to the fact.

Premium members should already have their handful of maps and murder-tools – but common or garden Battlefield 4 owners will need to wait the customary two weeks till December 2.

Will you be participating in Battlefield 4’s last hurrah (or oorah, as the case may be)?