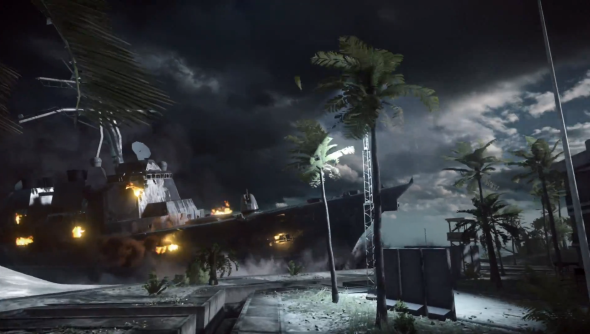 The hunt for the mythological, subaquatical beast that’s been hiding somewhere in Battlefield 4’s Paracel Storm map has come to a disappointingly kraken-free conclusion. Not because it’s been found, captured and shipped in chains to New York to be displayed on stage, but because DICE have simply up and erased it from existence.

All clues pointing towards the existence of the kraken have been rubbed out, and all means of triggering the secret levolution event have been unceremoniously deleted. Paracel Storm is now officially krakenless. Boo.

According to DICE, the studio just didn’t have the resources to finish implementing the cataclysmic map event, which code-scouring players say would have involved soldiers climbing specific palm trees while holding certain items, before bolts of lighting struck the ocean, followed by a UFO invasion that would have heralded the arrival of the sodden, Lovecraftian nightmare.

It was all a bit too epic for their coffers, it seems. This video from YouTuber Westie explains the decision and the removed event in some more detail.

Turns out this particular community-rousing kraken hunt was something of a (yes I know it’s actually ‘squib’ but this is a good pun so please bear with me for a moment)damp squid.

Or perhaps the evasive easter egg is part of an elaborate double bluff, and the kraken is behind youright now.