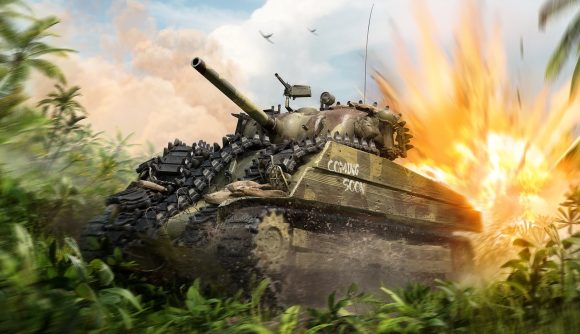 It took well over a year, but Battlefield V‘s 6.2 patch finally brought with it the long-awaited tank skins. But who’s counting, right? It turns out, a few hardcore fans were definitely counting – and they set up a website to keep track of how long it took the much-requested feature. The answer: 457 days, six hours, 33 minutes, and 29 seconds.

The site is comingsoontm.com, so-named as a wry dig at the length of time promised features seemed to take to arrive in Battlefield V. It had been running a tally of the time that had passed since EA DICE told players that tank customisation was planned for the game. Now it’s here as part of Update 6.2. Players can now pick paint jobs for their tanks, as well as turret and chassis dressings. These can all be purchased in the Your Company tab in the menu.

But since the feature took so long, EA is offering one skin for free. If you log in to Battlefield V before March 24, you can claim a full customisation set for the Sherman. The skin features extra treads carried on the tank’s hull and turret, some concertina wire stretched across its front armour, and some sandbags placed over the sprocket covers to hold everything down.

It also features a shout-out to Coming Soon™, seen on the makeshift wooden armour panels bolted to the Sherman’s sides. The words ‘Coming Soon’ are hand-painted on the boards, which is a nice little tribute to the community.

A Battlefield V community manager also tweeted a lighthearted gag – a photo of a DICE whiteboard, where a developer is writing in the new ‘Time To Player’ metric: 457 days, six hours, 33 minutes, and 29 seconds. It’s a bit longer than Battlefield V’s time to kill figure, you may notice, but the important thing is that we know now.

You can check out the rest of the patch notes for Update 6.2 here.